When California Gov. Jerry Brown signed AB 144 into law, the open carry ban of handguns (both loaded and unloaded), supporters of the bill probably thought that it would finally put an end to the peaceful demonstrations and protests held by responsible, law-abiding gun owners throughout the state.  Well, they thought wrong.  Gun owners do not go gently into that good night.

This past weekend, the Responsible Citizens of California held two Second Amendment demonstrations – “Long Guns Coming Out Meet-up” – to signal their disapproval with the way the state has treated responsible gun owners. 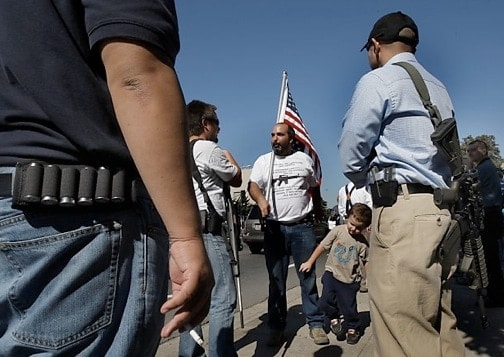 “Now, the only method of exercising your Second Amendment rights in California is to openly carry long guns, meaning rifles and shotguns,” Wolanyk added.

To drive the point home, several of the patriots wore a T-shirt with a photo of a long gun and a caption that read: “This is your only option for self-defense. I preferred carrying a handgun, but the governor said no.” 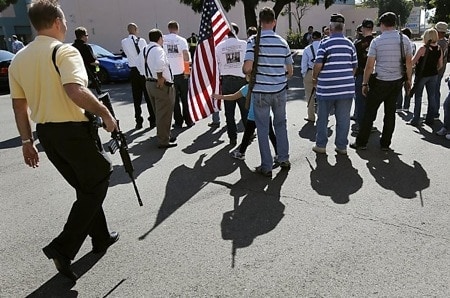 But not everyone was thrilled with the demonstrations.

“I’m going to get out of here because I don’t like guns,” one visitor told local reporters. “They scare me and it can get out of control, so we’re going to leave right now.”

Assistant San Diego Police Chief Shelley Zimmerman told reporters that complaints were not uncommon, “We’ve had many people come up [and say] that they’re concerned seeing this and so our whole goal out here is to provide a police presence.”

In response to the concern from onlookers, “We’re here,” said Wolanyk. “We’re not going away… might want to get used to it.”