You can probably call into question Texas Gov. Rick Perry’s stance on a number of key issues (immigration?) and you can probably criticize him for being a poor debater (that whole business in the last debate regarding Romney’s landscaper was arguably ill advised and in poor taste).

But one thing you can’t call into question is his undying love for guns.

This past weekend Gov Perry was at Loess Hills Hunting Preserve in Merrill, Iowa.  He was hunting pheasant with Rep. Steve King (R-Iowa) and he had a chance to explain a little more about his love affair with guns and hunting. 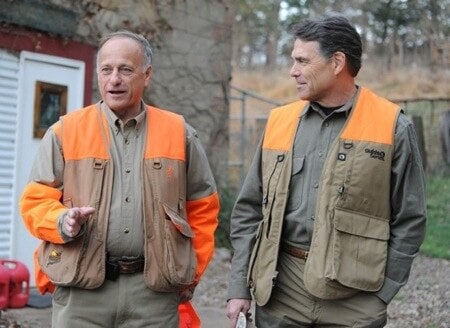 “I wish my son and my daughter were here with us today,” Gov. Perry added. “They would truly enjoy this, but from my perspective that’s part of America is walking across that hillside with one of your children hunting whatever it might be, being able to teach the safety, being able to teach the use of firearms, respect them and obviously the ability to protect yourself and your family if that’s required and to know those skills and that very important part of protecting America and defending the second amendment.”

But if you believe talk is cheap and you’re wondering whether Gov. Perry walks the walk, then you can find solace in the fact that Perry often carries a handgun.  In fact, he even carries his pistol while jogging.

And in April 2010, Gov. Perry actually shot a coyote with his laser-sighted .380 Ruger (loaded with hollow-point bullets) while on a jog with his dog.  His account of the incident is rather humorous (unless you love coyotes).

“I’m enjoying the run when something catches my eye and it’s this coyote. I know he knows I’m there. He never looks at me, he is laser-locked on that dog,” Gov. Perry told reporters.

“I holler and the coyote stopped. I holler again. By this time I had taken my weapon out and charged it. It is now staring dead at me. Either me or the dog are in imminent danger. I did the appropriate thing and sent it to where coyotes go,” he said.

Perry also has a ringing endorsement from the NRA.  They write of Perry:

At the presidential level, gun rights form a major part of Rick Perry’s conservative appeal, a fact that might come into play should he run for president. He has a lifetime A+ grade from the National Rifle Association — in stark contrast to President Obama, whose support for gun rights has been, shall we say, seriously questioned by Second Amendment activists.

And as far as gun control is concerned, Perry has a pretty unique stance (watch video below):

Gov. Perry’s the real deal when it comes to being pro-Second Amendment and pro-gun ownership.

But my grade for Gov. Perry on guns is 4.5 stars – out of five.  I took off half a star because he puts a laser sight on his jogging gun.

I mean, how does he expect to run a six-minute mile with a laser sight weighing him down?