What makes Internet rumors so seductive?  Why do people insist on emailing each other chain letters and conspiracy theories and other such nonsense?  Is the truth just too boring to accept?

I have a theory that at least partly answers those questions when it comes to people like George Soros and the Koch Brothers.

It’s the golden rule.  Who has the gold, makes the rules.

Quite frankly, those gentlemen have a ton of gold (or cash).  So, there’s no doubt that they also have tremendous political influence.  And depending on which side of the political spectrum you identify with, either of them can be viewed as altruistic philanthropists or nefarious political subversives – or, perhaps, some combination of the two. 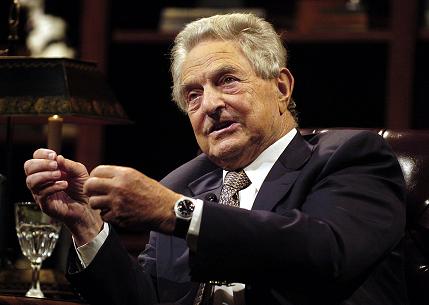 The most probable truth is that neither Soros nor the Koch Brothers are as good or as bad as people make them out to be (if you think this assessment is wrong, please tell me why in the comment section).

However, what can’t be argued is that they definitely wield a lot of power and, as a result, they’re the perfect target for conspiracy theories and Internet rumors.

A recent example of this is a rumor that was populated on the Internet concerning George Soros’s hidden agenda to gobble up firearms manufacturers via The Freedom Group (a company that has, in fact, recently purchased several firearms manufactures) for the purposes of controlling the gun market.

Here was how the viral story/email read:

I googled “Cerberus capital management freedom group buying guns” and found many stories about this. Without lots of research, it looks like it is true!

For the last several years a company called  “The Freedom Group” has been buying up American gun and ammunition manufacturers.

Some of these companies are:

Some people worry that Freedom Group is going to control most of the firearms companies in the United States. Of course, if you control the manufacturers you can decide not to sell to civilians, or, you can raise the prices to ridiculous levels or you can make the supply of guns and ammo scarce – all sorts of logjams.

What a perfect way to control America’s guns!

If you do some digging you will see that The Freedom Group is owned by a Wall Street investment company called “Cerberus Capital Management”.

“Cerberus” in the epic book “The Inferno” by Dante Alighieri, is a three-headed demon hound (from Roman mythology) that guards the Gates of Hell to prevent those damned souls who have just crossed the river Styx, from escaping back to the world.

Please pass this on to all your freedom loving friends. This needs to come out – and quickly!  Why have we not heard about this in the “mainstream” media? I would think this would be BIG news.

The absence of big media coverage on this important subject should be BIG news to you, too!

Well, the NRA came out and released a statement that cleared up this rumor.  They said in a statement:

Recently, an old rumor regarding Cerberus–the private equity firm that owns Freedom group, a holding company that in turn owns a number of firearms manufacturers, including Remington, Marlin, Bushmaster, and DPMS–was in some way tied to George Soros.

This rumor is completely false and baseless.

NRA has had contact with officials from Cerberus and Freedom Group for some time.  The owners and investors involved are strong supporters of the Second Amendment and are avid hunters and shooters.

In reality, at no time has George Soros ever been a part of the ownership group of Freedom Group or Cerberus, and as a privately traded corporation, there is no possibility that he will be in the future.

This unsubstantiated rumor has caused a great deal of unnecessary concern for gun owners. NRA-ILA urges our members to take great care before repeating baseless rumors found on the Internet.

And if the NRA’s response wasn’t enough to convince you, click here for a list of Cerberus Capital’s 26 senior executives.  You’ll not find George Soros listed.

However, you will find out that Stephen Feinberg, an avid hunter, and William Richter founded the firm in 1992.  Both still serve as senior managing directors.  Other senior executives include former Republican Vice President Dan Quayle and former Republican Treasury Secretary John Snow.

The bottom line, George Soros is not affiliated with the Freedom Group or its parent company Cerberus Capital.