No matter how knowledgeable you are about guns or self-defense, marksmanship know-how must be frequently visited prior to and throughout tactical training. In other words, shooting handguns accurately is the most important thing and the two most important marksmanship fundamentals are sight alignment – the relationship of your front sight to your rear sight – and trigger squeeze. 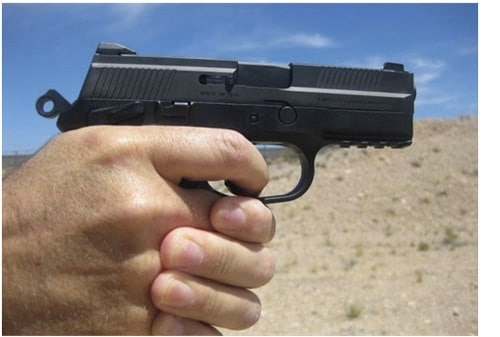 When it comes to sight alignment, proper sight picture is a must. Align your sights, making the front sight clear and lined up with the rear sights. Proper sight picture is accomplished when the target is fuzzy. If you concentrate your vision at the target, your sights will be fuzzy. You don’t want that. So concentrate your vision on your sights. Many shooters have a problem with doing this. But, like a pilot in the clouds, you need to trust your instruments more than your instincts. Rely on your sights. Trust them.

Trigger press, trigger squeeze or trigger pull (however you wish to say it), is another absolute.

Recently I was working with a shooter who has troubles hitting the mark. She’s not alone. A lot of folks know what a proper sight alignment is when drawing it on paper. The top of the front sight is aligned with the rear.  Elementary.

Her problem? A lack of trigger concentration.  She’d slap or yank or jerk the trigger. The trigger should be applied smoothly and straight back to the rear. Smooth and steady does it. Smooth in (the shot breaks) and smooth out (or back off the trigger).

Sometimes, shooters have a tendency to do what’s called freeze sights. They line up the shot, and pull the trigger as quickly as they can; they incorrectly suppose that pulling the trigger quickly while the sights are aligned will make the round go into their intended target. This simply will not work. Realizing this was one of the things the aforementioned shooter was doing, I told her to say this to herself: “I will watch the front sight (aligning it with the rear sight) all the way through a smooth trigger press.”

I cannot say it enough.  Those two elements together – sight alignment and trigger squeeze – are the most important fundamentals for marksmanship accuracy.

Breathing. Everyone does it, but not everyone does it right when it comes to shooting. When shooting in positions other than prone, simply hold your breath and shoot. Holding your breath will still your body and permit for better (and more easily attained) sight alignment.

Now for the bad news: unless you clamp your pistol in a vice, you’re going to wobble a bit. This is natural. It’s called an arc of movement. Learn to fight through it. Squeeze the trigger smoothly all the way through while holding a “good” sight alignment/sight picture, and you’ll hit your intended target. Having an arc of movement, just says you’re alive… which is a good thing.

Beware of convulsing the entire grip of the hand. Often this exhibits a shot that is low and left for right-handed shooters, but this “milking” of the hand can also cause the shot to go high and right with right-handed shooters as well. With Southpaws, it’d be the opposite. Sure, this off-the-mark shooting can also be blamed on a host of other things as well—things mentioned and things I’ve yet to mention, or won’t necessarily mention here. It’s for that reason that you cannot always agree with those charts that diagnosis what the shooter’s doing compared with where s/he is hitting. 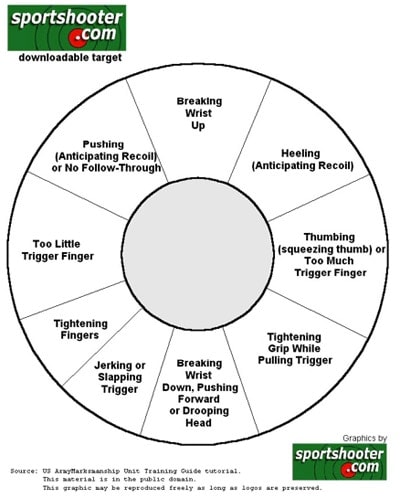 At any rate, if you’re shooting off target, check your trigger and your grip and see if that will help you get back on target a little better.

Flinching is “a normal reaction to an abnormal event,” to borrow the words of psychologists who speak about PTSD. The loud BANG, the blast pressure and the recoil of the gun makes flinching a normal occurrence. Learn to fight through it. Doing ball and dummy accuracy shooting drills, utilizing an immediate action malfunction drill will help.

Finally, I never tire of saying it: it’s a smooth trigger press all the way through a proper sight alignment that matters most. Practice over and over and over again. “Repetition is the law of learning,” I like to say to my students, “so do it again!”

Until next time, keep honing your skills and keep adding to your tactical toolbox.