What To Do If You Are “Outed” While You Carry Concealed

It happens to us all sooner or later. You are out in public somewhere and for some reason or another someone spots the gun that you were trying to carry concealed. So what do you do now? Try and explain or split before the cops arrive?

As long as you are carrying a legal firearm and not in a place like a government office like the Post Office or a Federal building than you have no reason to fear the fuzz.  Now that does not mean you might not have to do some explaining, but I am getting ahead of myself.

The first thing I will tell you not to do is to take off.  Nothing screams suspicious behavior like a guy just seen packing iron and now taking off for the hills. Try to be calm, I know this is going to be tough, but you really do need to act that way. I will tell you the story of my first time unintentionally brandishing a firearm while still in its holster. 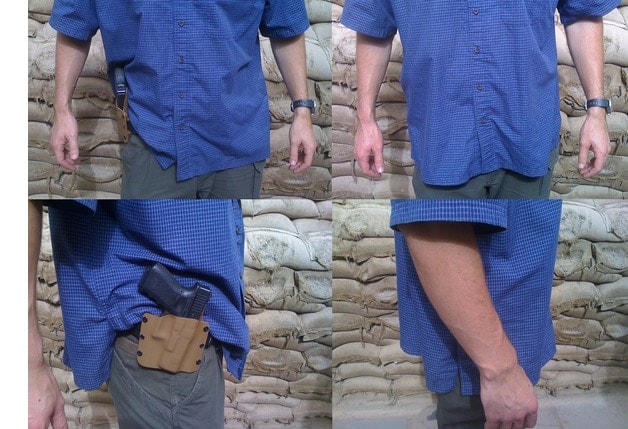 I was nineteen years old, I had just gotten my pistol permit and I knew very little about carrying a firearm concealed. I had a Ruger Blackhawk .357 in a cheap Uncle Mike’s holster because at the time it was all I could afford.

It was in the fall so I was wearing a heavy flannel jacket that normally covered the gun well. What I didn’t realize was that when I had gotten out of my truck, the jacket got pulled up over the grip of the gun in that crappy holster. I was walking across a parking lot and into a gun store of all places when a family of four came walking down the sidewalk. The father literally freaked out, grabbed the kids and wife and ran—and I do mean ran—in the opposite direction. It took me a few seconds to figure out why, but then I got the message.

Luckily none of the local constabulary ever arrived, but that was quite a few years ago and times are not the same now.

The best way you can prevent those little wardrobe malfunctions is to make sure that you have the best holster for the task at hand. I am able to comfortably conceal a large N-frame Smith & Wesson revolver during the colder months with little trouble because I have the right holster and the right clothing.

But be realistic: the best laid schemes of mice and men go oft awry and somedays even your best efforts fall through the cracks and you have to be ready for what happens and how you’ll handle it. 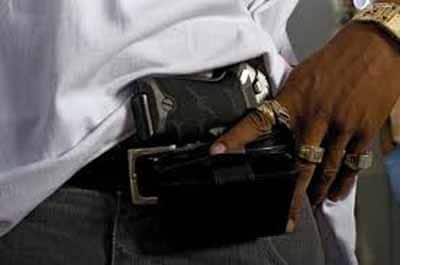 If a person does see you, don’t go rushing right over to them and try to explain your entire belief in the second amendment in one breath. You will make it much worse.  And just the same (and as I said before) do not bolt.  That will all but guarantee a visit from the cops as someone seeing you run away will more than likely call 911.

I know it’s hard, and I have to do it more than once, but you will have to be calm. Act as if nothing happened. I have had to do it more than once and, knock on wood, I have never had any issues. If the person does come up and ask you about it, address it coherently, accurately and above all calmly.  Don’t get mad and don’t get defensive (but also don’t feel like you’ve got to apologize for anything either. You’re doing nothing wrong).

You might be saying, “So what if the cops do show up?” Well, I can’t tell you how that particular officer will act since there are some cops who are pro-concealed carry and others who feel that citizens should not own firearms period.  Who knows who you will get. I can only tell you that panicking isn’t the right move and running away will probably make it worse.  It’s just one of the responsibilities that you must face when you carry concealed.