The battle to win the hearts and minds of the general public with respect to firearms is being won by responsible gun owners.

According to a recent Gallup poll, “a record-low 26% of Americans favor a legal ban on the possession of handguns in the United States other than by police and other authorized people.”

In 1959, when Gallup first started asking Americans whether they favored banning handguns, 60% favored such a ban.

But now, as recent as October 6-9 when Gallup conducted it’s annual Crime poll, 73% of Americans believe there should not be a ban on handguns (see chart below).

Gallup also notes this interesting fact about the poll, “In the initial asking of this question in 1996, the numbers were nearly reversed, with 57% for and 42% against an assault rifle ban. Congress passed such a ban in 1994, but the law expired when Congress did not act to renew it in 2004. Around the time the law expired, Americans were about evenly divided in their views.”

Gallup also asked Americans whether they support making laws that relate to the sale of firearms “more strict, less strict, or kept as they are now.”

Those that support making gun laws “more strict” was also at a record low by one percentage point – 43%.

44% of Americans are in favor of keeping laws as they are now and only 11% favor making gun laws less strict. 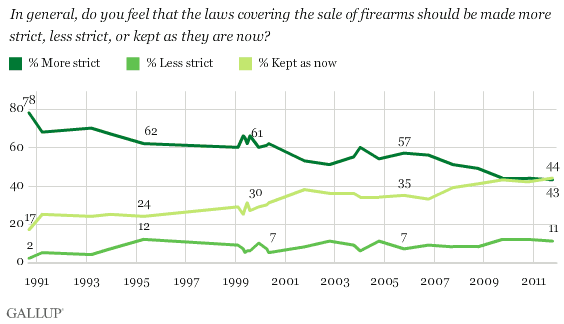 Gallup also broke down the support for stricter gun laws by key subgroups.

Additionally, Gallup broke down the support for a handgun ban by key subgroups.

Gallup makes the following observations, “Democrats, Eastern residents, members of gun non-owning households, and women were among the few subgroups to favor a ban on handguns in 1991, but now no key subgroup has a majority in favor. Those with guns in their household are least likely to favor a handgun ban.” 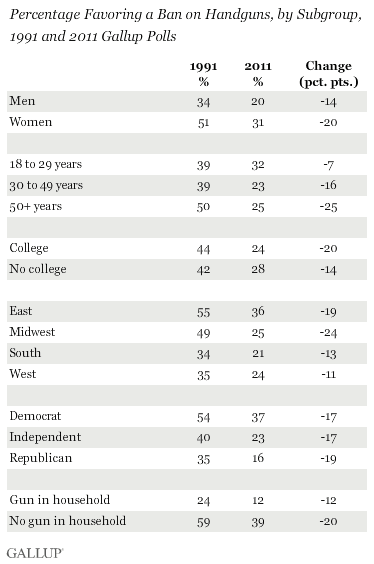 To explain why Americans have shifted to a more pro-gun stance with respect to handguns, assault rifles, and gun laws, Gallup points to a poll that found “widespread agreement with the idea that the Second Amendment of the U.S. Constitution guarantees the right of Americans to own guns.”

They also suggest that Americans may be becoming more libertarian in their views (they point to the growing support for the legalization of marijuana) and that “Diminished support for gun-control laws may also be tied to the lack of major gun-control legislation efforts in Congress in recent years.

Gallup states that the “reasons for the shift do not appear related to reactions to the crime situation, as Gallup’s Crime poll shows no major shifts in the trends in Americans’ perceptions of crime, fear of crime, or reports of being victimized by crime in recent years. Nor does it appear to be tied to an increase in gun ownership, which has been around 40% since 2000, though it is a slightly higher 45% in this year’s update.”

Personally, (and despite what Gallup stated) I think more and more people are beginning to recognize the fact that more guns does not equate to more crime.

Moreover, I think more and more people are beginning to distinguish between responsible gun owners and violent criminals who’ve obtained their firearms illegally.  And I think peaceful demonstrations by pro-gun organizations and tea party members have done wonders to convince the general public that gun owners are good people.

But whatever the reason(s) is for the shift in opinion, it’s clear that we’re winning the battle against the pro-gun control crowd.  However, the war is not over.  And we’ve got miles to go before we sleep.