Outstanding Finnish rifle manufacturer Sako announced a beauty early this month at the London defense trade show DSEi, the new TRG M10.  It’s modular, so it can be taken apart in the field in minutes, and a simple swap of the bolt and barrel is all it takes to change calibers from 7.62 NATO to .300 Winchester Magnum to .338 Lapua Magnum.  It’s tactical because it’s desert tan, which as we all know, is the new black.

In 7.62, it’s an 11-shot rifle, in .300 seven, and .338 eight.  In its varying configurations, it weighs between twelve and fourteen pounds, and without tools, it can be quickly disassembled. 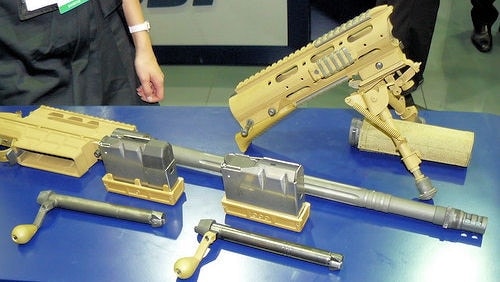 It’s designed to compete with the likes of Barrett’s MRAD sniper rifle, which it does on all fronts.  Not only is it chambered in more than just .338 Lapua Magnum, it’s available with several different length barrels, is lighter, and has long and short forearm options.

The sticky widget is availability to the public.  Full-power bolt-action rifles aren’t prohibited to, well, anyone, but Sako, a subsidiary of Beretta, says that for now, they’ll only be for sale to military and police forces.  However, at next year’s SHOT Show, they might be singing a different tune, as there’s already considerable public demand.