It’s that time of year again. The leaves are turning, the smell of sizzling Johnsonville Brats fills the air and Kirk Herbstreit has finally re-emerged from hibernation in his tanning bed. Ahh college football. That magical 12 weeks specially anointed by Touchdown Jesus himself where a cheerleader’s smile is unassailable, a riff of that old fight song still stirs the heartstrings and college mascots everywhere exercise their God-given right to bear arms.

In a sport as American as the 2nd Amendment, is it any wonder guns and gun imagery permeate the pageantry that is college football? This week’s AP Top 25 features nine programs whose mascots or gameday traditions are steeped in gun or military culture (although some are more obvious than others).  For instance, the Bayou Bengals of LSU may be the national frontrunner and a Sugar Bowl favorite but few outside the state of Louisiana realize the “Geaux Tigers” chant has more to do with Robert E. Lee and the Tiger Rifles than Mike VI.

While the SEC is no stranger to this phenomenon, the Big 12 far outstrips its post-season rival in terms of firearm friendliness (at least in costume). No surprises here. This conference of plains states, rich in pioneer culture, plays host to each of the top 3 most gun friendly teams in the Top 25 (WVU’s move being all but a fait accompli). So without further ado, here is an overview of the 3 teams most responsible for the proliferation of gun culture: 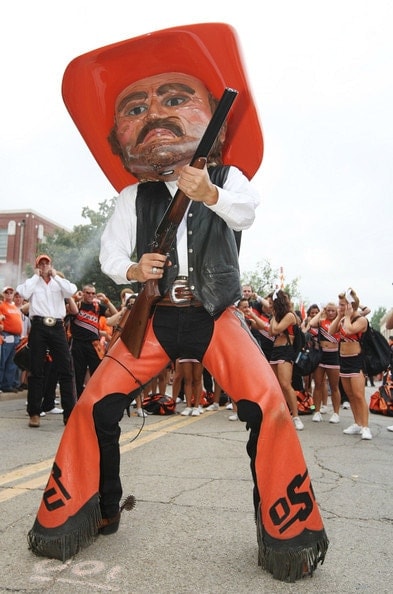 Mascot: The Cowboys/Pistol Pete
All Time Winning Percentage: .499
Post Season Winning Percentage (last 5 years): .600
History:  Although Pistol Pete only became an official mascot of the University in 1984, his tenure on the Cowboy sidelines began in the mid-‘50s. A larger than life caricature of the legendary gun-slinging lawman and Aggie supporter Frank Eaton, the modern day Pistol Pete leads the team onto the field at every home game and fires his weapon with every Cowboy score. He also encourages the crowd with the double pistols hand gesture and “Pistols firin’” is a frequent rallying cry among the Cowboy faithful.
Official Weapon:  Ruger Blackhawk .357 Magnum pistol, rifle and double barrel shotgun of unknown make and model
Fun Fact (s):  Pistol Pete’s fiberglass head weighs over 45 pounds and was originally designed by the Master tinkerers at Walt Disney. In a 2010 ESPN fan poll, Pete beat out Benny the Bull of the Chicago Bulls to solidify his spot as the nation’s favorite mascot. 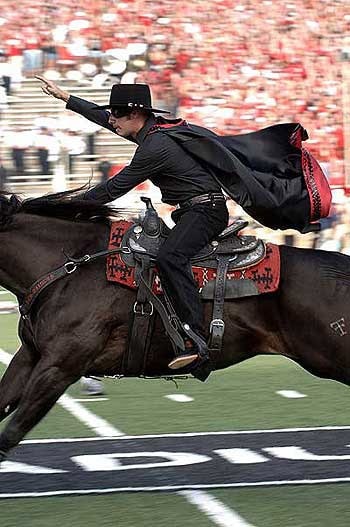 Mascot: Red Raiders/The Masked Rider
All Time Winning Percentage: .544
Post Season Winning Percentage: .800
History: The Red Raider became the official mascot of Texas Tech in 1954. Adorned in the traditional garb of the Southwest, including his signature gaucho hat, the Masked Rider is an homage to Texas’ Spanish and Cowboy roots. Today, the Masked Rider with “guns up”, the traditional Texas Tech hand gesture, leads the team onto the field before every home game from atop his trusty steed.
Official Weapon: None. Though the “guns up” hand gesture is a common greeting and sign of victory amongst Tech fans, it is a common misconception that the Masked Rider is in fact armed.
Fun Fact(s):  The first female Masked Rider saddled up in 1974. (Props to Tech for their progressiveness). 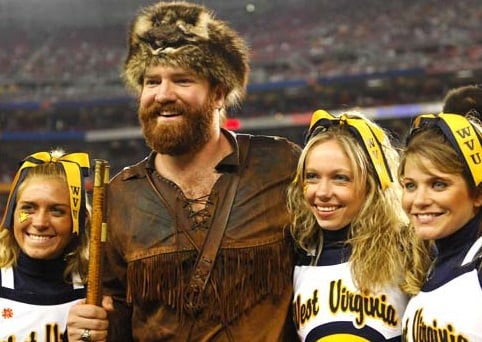 Honorable Mentions: The Oklahoma Sooners’ RUF/NEKs Spirit Squad; The Texas A&M Aggie Cadet Corp and the Spirit of ‘02
Plus 3 More: Clemson, which started as an all male military instituition similiar to VMI, South Carolina, which gets its Fighting Gamecocks nicked name from Revolutionary War guerrilla general Thomas Sumter’s nickname “The Fighting Gamecock,” and Virginia Tech with its Corp of Cadets.