Back in the late aughts most Western militaries were looking for something to replace their AR-platform rifles, if that’s what they issued.  The SOCOM issued its standards, as did the US Army and most other armies followed suit.  They do vary but as a rule of thumb they all required rifles with a greater number of rounds fired between stoppages, light dry weight, and caliber interchangeability.

The US hasn’t picked anything out yet, but that’s because our military is huge and deals with a whole lot of contractors.  The Italian military, by comparison, is a lot smaller, deals with fewer arms manufacturers, and can make these decisions a lot more quickly.

They gave their reqs to Beretta, and Beretta gave them the ARX 160.

The ARX 160, developed for Italy’s Soldato Futuro program, is chambered in 5.56x45mm NATO, 5.45x39mm, 6.8 mm Remington SPC, and 7.62x39mm, and can be converted between them with no tools.  Not “no special tools,” no tools whatsoever, and Beretta makes barrels in all imaginable lengths.  It’s also fully ambidextrous and can have the charging handle reversed as well. 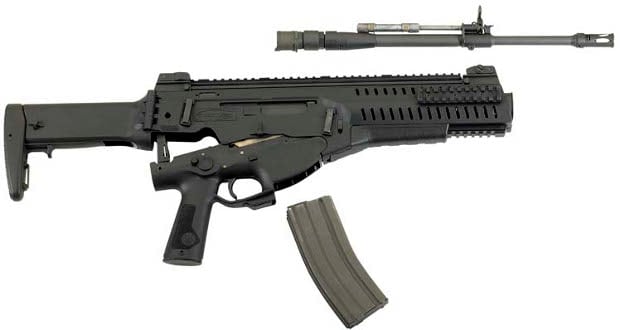 The ARX 160 uses a short-stroke gas piston system, similar to most piston-driven AR variants, although the only AR-like part on this rifle is the magazine and the placement of the safety and mag catch.  Its upper and lower receivers are largely polymer and the upper is a monolithic-style with an extended quad rail that is contoured to carry the GLX 160 grenade launcher (which can be modified for use independently).  The way the two receivers come apart leaves no loose pins, springs, or screws.  Another advantage of the polymer construction is the fact that it is both easy to clean and requires less of it.

It doesn’t have a buffer tube so it’s issued with a folding stock, not unlike Robinson Arm’s new folding stock, and it has a wide range of stock adjustments to really adapt to the shooter, and the ARX 160 offers no fewer than six sling points.  And the rifle weighs in at a reasonable 6.8 pounds.

Beretta started equipping the Italian military with these new rifles back in 2009 and won’t stop until everyone’s got one.  We can’t decide if it’s pretty or ugly, but we can definitely respect the package.

So, Beretta, care to make a semi-automatic ARX 160?  Pretty please?