Nov. 1st, this past Tuesday, was the start of something beautiful in Wisconsin.  It was the day in which concealed carry became legal provided one has a valid CCW permit.

To obtain a CCW permit, one must fill out an application; pass a background check, and complete four hours of firearms training.

DOJ spokeswoman Dana Brueck told the Associated Press that as of mid-afternoon Tuesday the agency had received 145 applications, approved 123 and printed 85 permits.

But there’s a good chance that’s only the tip of the iceberg.

“A DOJ website began offering downloadable applications at midnight, and as of noon, it had received almost 800,000 hits and visitors had downloaded at least 83,000 applications,” Brueck added.

It would appear that many Wisconsinites are thrilled with new law.  But it’s been quite a battle to get a concealed carry law passed in the Badger State. 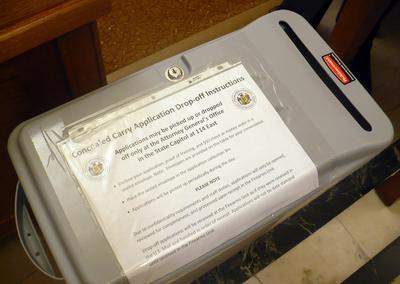 In fact, lawmakers have twice passed a concealed carry bill, in 2003 and 2006, but the then-Gov. Jim Doyle, a Democrat, vetoed both bills.

“I would say yes, it’s been a long time coming,” Rob Kovach, chief of staff for state Sen. Frank Lasee (R-DePere), told the AP as he dropped his application off at the state Justice Department’s Capitol office Tuesday morning. “I just want to be able to exercise my right if I feel (I need to).”

Andrew Herritz, an engineer from Rock Springs, told the AP that he wants to carry concealed to ensure he could fight back if a criminal attacks him.

“I hope I never, ever have to use it,” Herritz said. “My job is just to make sure I can protect myself if I ever need it.”

And Matt Slavik, an information technology worker from Brookfield, downloaded his application at 1 a.m. He told the AP he couldn’t sleep and felt like a kid waiting for Christmas morning.

“(The law) means I can protect myself and my family,” Slavik said. “It’s not the gun I love. It’s the people it protects.”

There are still some wrinkles to iron out with respect to the new law.  One is the growing debate over the number of training hours (4 hours) Attorney General J.B. Van Hollen has mandated to satisfy the training requirement.

Also, lawmakers are still figuring out where they will allow one to carry with respect to state buildings.  Gov. Walker has decided to allow firearms into all the state buildings he controls, including parts of the Capitol.  Legislators and the Supreme Court justices are still hashing out the details.

All in all though, a hearfelt congrats to the Badger State – becoming the 49th state to legalize concealed carry (you’re next Illinois).