Following up on their immensely popular Z-Max zombie-stopper, Hornady’s introducing a hot and heavy new cartridge for the more serious purpose of crime-stopping.  With an eye on the police market, it’s coming out in 9mm and .40 S&W, and it’s impressive in both.

Taking the same polymer-filled hollowpoint style used in their other plastic-tipped bullets, the Critical Duty bullets have an extra-heavy high-antimony lead core that adds ten extra grains of mass to their .40s and 20 to the 9mms, compared to Critical Defense ammo, without sacrificing much if any muzzle velocity.

Critical Duty ammo is comes with a slight price premium over Critical Defense, but should be available for about $20-22 for a box of 25 cartridges, so not really any different than other “duty” ammunition.  Like most of Hornady’s high-end stuff, it’s nickel-plated and designed to be chambered and re-chambered.

The stats (Hornady doesn’t list whether they used a three- or four-inch barrel, but either way these numbers look good on paper):

The “Flexlock” bullet is cannelured and crimped into the case; this prevents bullet setback, which can inadvertently cause pressures to spike, and you know, kaboom.  This is especially a risk with firearms that use polygonal rifling, i.e. Glocks, when the ammo is loaded and unloaded repeatedly. 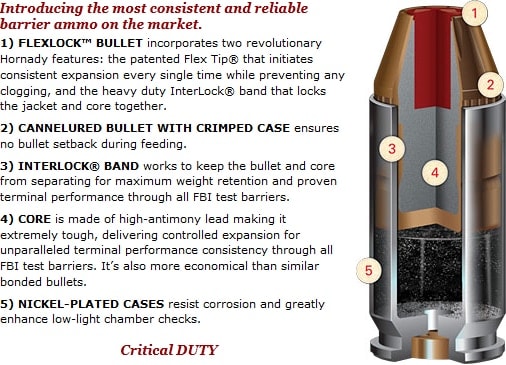 Hornady’s in-house FBI-protocol testing shows that these bullets reliably expand through all materials, from heavy clothing to steel, while consistently penetrating about thirteen to fifteen inches into the gelatin, with none of the hollowpoints clogging shut and over-penetrating or breaking into bits.  That’s practically unheard of, and without a doubt because of the polymer tip and mechanical, not bonded, fit of the case to the core.

We don’t like using just the manufacturer’s tests to prove a product, but Hornady has a track record of not fudging the numbers in their favor; Critical Defense ammo is already a staple for many shooters including law enforcement, and independent tests have only confirmed Hornady’s results.  We would be surprised if this stuff is any different, and also, cannot wait to get a hold of some.  ‘Cause come one, cops aren’t the only people who are gonna like this stuff.

If we had one gripe, it’s that Critical Duty needs to come out in other calibers, or at least, caliber.  Where’s the big bore brother?