Working on Your Flash Sight Picture for Self Defense Scenarios

In gunfights speed counts. The man (or woman) who gets quick and accurate shots on target first has the best chance at winning. Since most self-defense and close-quarters firefights occur between approximately 7-yards (21 feet) and bad breath distance, there mustn’t be any wasted time in acquiring a perfectly aligned sight picture prior to pulling the trigger. One of the best methods for aligning sights quickly is a technique called flash sight picture.

Perfectly aligned iron sights are nice for hitting a steel target with a pistol at 100 yards, but getting the sights lined up just right and concentrating on the trigger, all while adjusting to the natural arc of movement while slowly squeezing the trigger takes entirely too long in a real life self defense scenario.

Since you’re up close, or within about 7-yards, it won’t matter as much if your sights are lined up perfectly. It won’t matter much if you flinch or anticipate just a little at five yards or less, right? But, it will matter a lot if someone at that distance is a threat to you – someone who has a gun and is eager to use it on you, that is.

By response, that means you’re intent on using lethal means to stop them. After all, you’re only initiating firearms defensive tactics because they are trying to kill you, right? 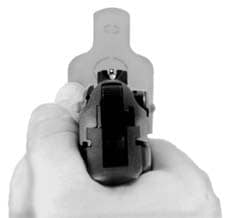 As a good guy, you already have a disadvantage because you’re on the defensive, reacting to their aggression. Hopefully your attacker hasn’t totally taken you by surprise. Hopefully you’re locked, loaded and ready to defend yourself and others should this terrible nightmare scenario unfold. Well, since action is faster than reaction, and because speed matters in gun fights, you’ve got to shoot as quickly as you possibly can (and shoot as much as you need to) in order to stop the threat.

I’ll spare the point shooting discussion for another time. For now, just trust me when I say that getting an imperfect, flash sight picture when you’re at a close distance to your target/threat, drastically increases the chances you have at hitting your intended target.

When using iron sights, try to get a flash sight picture—again, where the front sight isn’t in perfect alignment, but kind of bobbles around in the rear sight. If you’re close enough to the target and have a smooth trigger, you’ll hit your target.

Now, remember, only shoot as fast as you can shoot accurately. You’ll need to balance the axiom of “one slow hit is better than ten fast misses” with speed, surprise and violence of action (a.k.a. a lot of rounds on target very quickly). Practice the quick or a blurry “flash” view of your sight picture. Shoot, move and communicate. Live to see another day.

Now, just a few more quick tips: One handgun shot will not likely stop anyone. You should never assume that it will. Shoot until there is no longer a threat.  Use that flash sight picture technique on center mass of the target.

Finally, after shooting the video I realized that I shot rather quickly. My experience is likely difference than yours. When you first try this technique of shooting quickly while picking up a flash sight picture, slow down and visually see that front sight post every time you pull the trigger. Have fun in practice. Train hard, train well, and be prepared for the future.