In September of 2010, Tim Martin, the mayor of Freeland Borough, a small town in Northeast Pennsylvania, regrettably lost his battle with esophageal cancer.  As is always the case, the death of an outwardly popular, three-term mayor is extremely upsetting news.  What’s also upsetting though is the fact that, since his death, New York Mayor Michael Bloomberg’s anti-gun group, Mayors Against Illegal Guns (MAIG), has used Martin’s name and signature in their correspondence with major media outfits, in coalition advertisements and in letters to the Senate, Congress and even the President of the United States.

We’re sourcing this eureka moment to the bloggers at Shall No Be Questioned, who, to our knowledge, appear to have been the first gun guarding gumshoes to notice this inconsistency.  Their website provides several examples of documents bearing the deceased Mr. Martin’s John Hancock.  Here’s a rundown of some of the letters Martin has signed since his death: 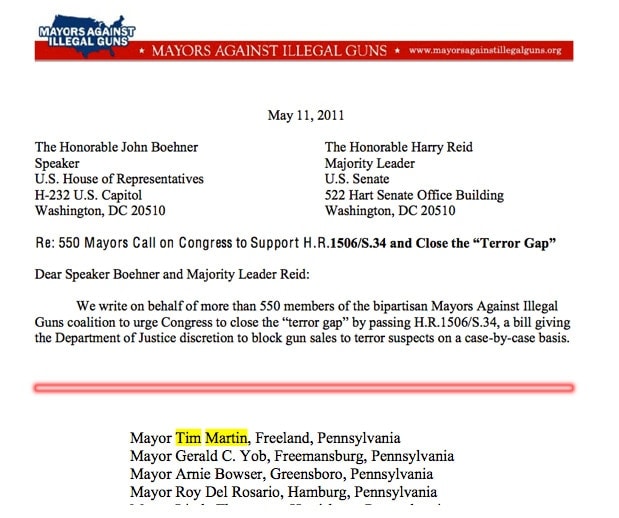 Additionally, as of two days ago, Mayor’s Against Illegal Guns website has continued to list Mr. Martin as a member.  As you may well have imagined, this revelation went a long way to provoking a response from the Bloomberg camp, and, yesterday, MAIG’s released this response:

“With more than 600 mayors in cities across the county, there are always going to be changes to keep up with. We actually called every one of our 169 mayors’ offices in Pennsylvania this summer to confirm status. The staff in Freeland never returned our calls, so we relied on the government websites, which still list him as Mayor.”

Now, Guns.com certainly appreciates that expedient communication is crucial to effectively operating any enterprise (and we know well that often times, if you sit on your hands and wait on the other party to get there ducks in a row, you’ll be waiting in vain with nothing to gain). But even to our business friendly sensibilities this is a pretty thin excuse, especially coming from a political organization that does things like influence gun policy and the upholding of the 2nd Amendment.

Martin is from a small town that only supports a minimal staff (a reality he shared with many other mayors on the MAIG list).  The fact that their website had not been updated is concerning (it is a government website) but definitely not unexpected and if Mayors Against Illegal Guns wanted to snowball Mr. Martin’s political influence into their campaign of petitions and advertisements, they should have at least spoken with him on a regular basis before blindly including his name on lists.

Because, implicitly, MAIG’s response concedes that participating members of this advocacy organization are not necessarily made aware of the specific initiatives they are lending their name and support to and, no matter what way you slice that, this practice is not particularly ethical.  To echo the damning question from the original blog posting, “How many other mayors out of the 600 didn’t return Bloomberg’s call?”