William Doolin was born sometime in 1858 in Arkansas as the son of a sharecropper but his future endeavors were patently sinister. Doolin lit out for the Indian Territory in 1881 and started working as a cowboy. Finding the pay from an honest day’s work unsatisfactory, Doolin turned to crime and soon hooked up with a few other interesting characters, one being Emmett Dalton. Doolin joined the Dalton gang in 1891.

Doolin rode with the Dalton’s for a couple of years and decided not to take part in the Coffeyville, Kansas raid on October 5, 1892 where the whole gang, for the most part, was shot to pieces as the townspeople decided they really liked the money in their banks and not in the saddlebags of outlaws. After the Daltons had been given a high dosage of lead poisoning, Bill Doolin formed his own gang and for a while terrorized the Oklahoma territories taking in around $165,000.

In 1893 U.S. Marshal Everett Nix started cleaning up the territories and appointed over one hundred deputies including three of the most famous lawmen of the west, Bill Tilghman, Chris Madsen, and Heck Thomas. The three were known as the “Three Guardsmen.”

On September 1, 1893 fourteen U.S. Marshals rode into Ingalls, Oklahoma trying to capture Doolin and his gang and ended up in what became known as the Battle of Ingalls. Marshal John Hixon opened up on outlaw Bittercreek Newcomb who was left badly wounded, but then all heck broke loose as the other gang members started firing from a nearby saloon. Arkansas Tom Jones fired from an elevated angle wounding another marshal who would die the next day. In the end, three of the marshals died and Doolin escaped. 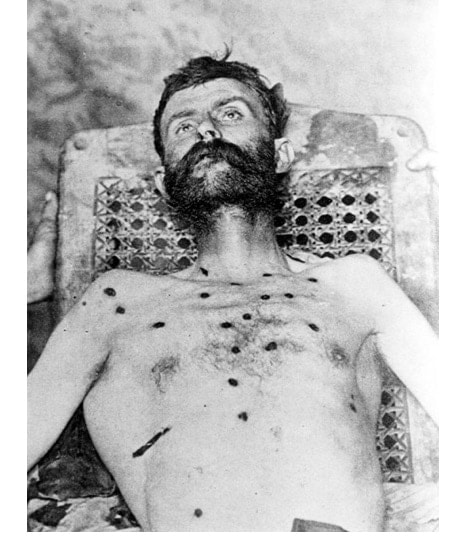 But not before he left an indelible mark on late 1800s law enforcement, shooting and killing Marshal Richard Speed.  Accordingly, officers saw to it that the members of the gang were systematically picked off over the next few years, including Bill Dalton who was shot in 1894. Doolin fled to Kansas and was finally tracked down in early 1896 to a bathhouse where Bill Tilghman was able to nab him.

Doolin was taken to Stillwater, in the Oklahoma territory where he promptly plead not guilty on the charges of murder and other assorted crimes. Doolin had agreed to plead guilty for a fifty year sentence but, as he later told Tilghman on his way to Guthrie, fifty years was a long time.

Doolin wasn’t in custody long enough to worry about it, on July 5 he and more than a dozen other inmates broke out of jail, and now one of the biggest manhunts in the territory was on with Doolin right at the top of the list.

It took some time but another member of the “Three Guardsmen” Heck Thomas and a posse tracked Doolin to Lawson and then waited for the outlaw to come out of a stable instead of trying to go in after him. After they had been set up for an hour, Doolin came out with a Winchester rifle in his hand and walked off. Thomas tracked him with a man on either side in case Doolin tried to run. Thomas had given one of his deputies his rifle and was he carrying an 8-gauge shotgun. Doolin got wise and turned and fired on Thomas and missed.

Before Thomas could get the big shotgun into action Doolin loosed another shot and missed again. Doolin went to draw his revolver but Thomas fired a single shot from the big 8 and the fight was over with Doolin lying dead on the ground. The famous photo of Bill Doolin lying dead on a slab was evidence of the justice dealt out to him from the barrel of a lawman’s scattergun.