For the second time in the last 12 months police officials stormed the headquarters of German arms manufacturer Heckler & Koch over allegations related to its controversial relationship with Mexico.

Last December officers from the regional capital of Stuttgart exercised a search warrant for the offices of H&K to examine whether the high-end arms maker sent G36 assault rifles to embattled Mexican states (Chiapas, Chihuahua, Guerrero and Jalisco), which would contravene strict German export laws that prohibit the sale of weapons to international zones of conflict.

The investigation connected to those allegations is still ongoing.

Meanwhile, this past Thursday, some 300 officers once again raided the headquarters on the suspicion that H&K “bribed officials in Mexico using cash payments for several years” in connection with arms deliveries between 2005 and 2010, Stuttgart prosecution spokeswoman Claudia Krauth told the Associated Press. 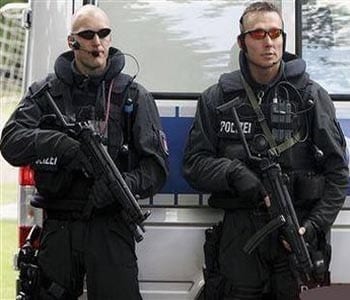 According to prosecutors, the point of the bribe was to boost H&K’s sales.

A spokeswoman for H&K confirmed the raid, but insisted that no wrongdoing transpired and that H&K will continue to work with authorities to prove its innocence.

With respect to the ongoing investigation regarding the G36 assault rifles, H&K maintains that it did not deliver weapons to those four aforementioned states, but to Mexico’s central weapons purchasing authority in Mexico City, which is permitted under German law.

Yet, despite H&K’s pleas of innocence, it also finds itself in hot water with German officials over the discovery of assault rifles in Libya.

According to the AP, “the company has said in that case it is fully cooperating with prosecutors and hopes that ‘light will be shed’ on how the now defunct Libyan regime obtained those weapons.”

“They were part of a 2003 government approved arms shipment bound for Egypt,” it said.

But then there are the rumors that the son of the former Libyan leader Muammar Gadhafi visited the company’s Oberndorf headquarters in 2003.  A rumor that the company says it can neither confirm nor deny.