Guns.com Talks with Larry Potterfield about his Amazing Company, MidwayUSA (Part 1 of 3)

Part One of our MidwayUSA Saga

He met me in the foyer, walked with me down the hall to his office. I expected him to be in his trademark red MidwayUSA shirt but he was in a bright floral-pattern short sleeve shirt and jeans. The office itself was large, but not obnoxiously so, with a view of Interstate 70 across the back of the parking lot. It wasn’t fancy or overdone. Yeah, there were guns, and trophy animals, and the other trappings of a successful life in business. But what struck me most was the sense of peace and quiet – this was a place where you can think.

“How do you like to work? Memory, notes, recorder?” Larry asked me, settling down into a chair, gesturing for me to have a seat on the small sofa across from him. Right there, I liked the man. This wasn’t a busy executive of a multi-million dollar corporation, tolerating yet another interview. This was someone who was being considerate of another person with a job to do. Granted, the chances were that in doing so he knew I would like him, and that what I would write would probably help him and his company, but he had nothing of the air of the huckster or someone who thinks they are superior as I have found in other successful executives. “Whatever you prefer. Do you have specific questions, or something?”

“A few. But mostly I’d just like you to tell me whatever you think is important.”

He smiled. “Well, this place is amazing…”

And it is. I’ll get into the nuts & bolts of how it is in the third and final part of this series. First I want to talk about why.

Larry Potterfield is why, of course. But I suspect it would take me a full book to plumb those depths, so let’s just hit some of the more obvious points in this first article.

I spent two hours talking with Larry, much of that getting a complete tour of the MidwayUSA campus, conducted by him. I was glad I wore good walking shoes. Energy is one of the reasons the place is amazing – Larry’s energy. He’s enthusiastic and believes in what they are doing. That kind of enthusiasm is infectious, and you could sense it through the entire place. 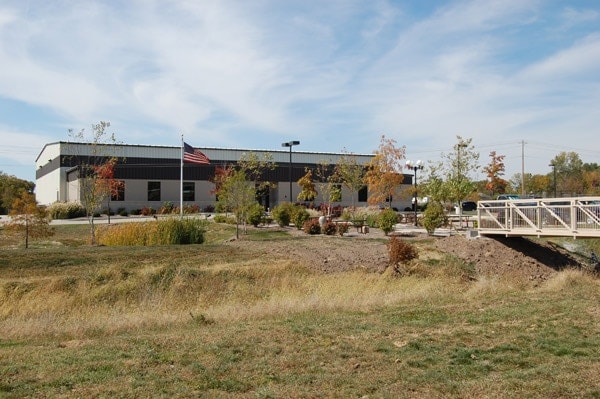 The tour also showed that Larry is not a distant, detached exec. He knew every inch of the campus. Sure, he’s clearly given the tour a lot of times, but there was nothing rote or routine about it. This was his company. He understood it. He knew all the products as we walked up and down through the stacks of products and parts, chatting with me about what kind of reloading components I preferred, how they solved this or that technical problem. But he also was perfectly at ease explaining the organizational set-up of each department as we moved through, discussing business processes and procedures which put MidwayUSA among the very best in terms of management in the country. This was love. Along the way, he introduced me to people. And not just the heads of departments, though there was no pretense that he knew every one of the several hundred people employed there. We stopped in one area where there was a Red Cross blood drive going on, and Larry chatted with people, joking about how they were lying down on the job. There was a good give & take, without the usual forced niceness people usually have when interacting with the boss.

We were closing out our tour of the grounds. As we walked from building to building, Larry told me of their plans to expand, moving some of the departments out of the main building where the warehouse is into other buildings. Where there would be a sidewalk, how they hoped to do this, do that. Between where his office is and where the order center is (yeah, when you place a phone order with MidwayUSA, you’re talking to someone here in Columbia MO) there’s a small creek. We walked over to where there was a backhoe operating on our side of the creek. “That’s where the new bridge is going – they’re building it in town, will bring it out here assembled, though of course we have to have the footings and everything in place.”

He looked up into the open cab of the backhoe, recognized the operator. “Excuse me a moment.” He went over to the side of the backhoe. I stepped up to the edge of the driveway, examined the excavation. And I could hear him exchange pleasantries with the grizzled operator. It was clear they knew each other from some time back, though I didn’t catch all of their conversation. He came back over to me after a couple of moments.

“Sorry about that,” he said.

I looked at him. “You have remarkable people skills.”

He seemed honestly surprised that I said this. “Why do you say that?”

We turned to go. I said “I’ve noticed it through the whole tour. But that summed it up right there, you having a bit of a chat with the backhoe operator.”

“Well, why not? He’s been out here to do jobs for us at several points, does good work.” He smiled, we cut across the parking lot, heading back to his office. “Why shouldn’t I chat with him? I respect his work. I may make more money than he does, but that doesn’t make me better than him.”

His smile got bigger.

Next: Larry Potterfield and the Secret Happiness