In all probability, and to the chagrin of hardline conservatives, former Massachusetts Governor Mitt Romney will be the Republican nominee for the 2012 presidential election.

In watching the Republican debates it’s clear that Romney looks and sounds presidential.  He’s intelligent, well spoken and coolheaded.  And many believe that out of all the candidates on the stage, he gives the Republican Party the best chance to dethrone Obama.

However, some have argued that when it comes down to the real issues, when it comes down to his core values and beliefs, Romney is more reminiscent of a well-heeled grifter or a snake oil salesman than the venerable statesman, the Reaganesque conservative, he would like people to believe he is.

Frankly, Romney is widely known as a “flip-flopper.”

Obviously, to revise or change one’s opinion on certain issues over time is not uncommon, especially when new facts or information become known.  After all, it was Churchill who said, “Change is the price of survival.”

But flip-flopping is not incremental revisions of one’s beliefs over a period of time; it’s deliberately changing one’s position to pander to, and curry favor with, constituents and voters.

Well, to answer this question, we should first establish what Romney’s position on guns and gun ownership is (below is a helpful video):

Romney’s philosophic view regarding guns is pretty straightforward and what one would expect from the presumptive Republican nominee, “I support the Second Amendment as one of the most basic and fundamental rights of every American,” he said at a 2007 National Shooting Sports Foundation, Candidates Speak conference.

This seems to be his default stance, his go-to platitude, whenever he is asked generic questions about guns and gun ownership

Yet when it comes to certain issues, like gun control and bans against assault weapons.  Romney’s position is seemingly self-contradictory.  Consider this quote from 2008 GOP debate in Boca Raton Florida:

I do support the Second Amendment. I would have signed the assault weapon ban that came to his desk. I said I would have supported that and signed a similar bill in our state. It was a bill worked out, by the way, between pro-gun lobby and anti-gun lobby individuals. Both sides of the issue came together and found a way to provide relaxation in licensing requirements and allow more people to–to have guns for their own legal purposes. So we signed that in Massachusetts, and I’d support that at the federal level. It did not pass at the federal level. I do not believe we need new legislation. I do not support any new legislation of an assault weapon ban nature, including that against semiautomatic weapons. We have laws in place that, if they’re implemented & enforced, will provide the protection and the safety of the American people. I do support the right of individuals to bear arms, whether for hunting purposes or for protection purposes or any other reasons. 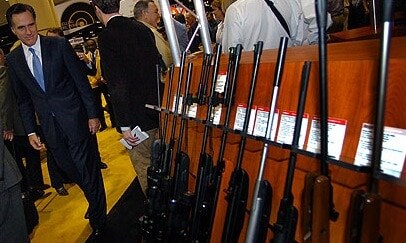 The truth is after spending the better part of the afternoon trying to figure out where exactly Romney stands with respect to guns, I’m not any better off now than I was when I started.  In short, I’m still largely confused and slightly suspicious.

That said, it’s clear Romney supports background checks and bans on weapons with a high lethality (I’m not sure what he means by this).

Overall though, I get the feeling that he is moderately pro-gun (call it a faith-based, rather than a fact-based, assumption).  And if elected I don’t believe he would meddle with the Second Amendment, gun rights and/or gun ownership.

Therefore, I give Romney 2 out of a possible 5 stars when it comes to his nuanced, but at times frustratingly contradictory, stance on guns.