New York Mayor Michael Bloomberg donated $25,000 to each of the six pro-gun control Democrats running for the Virginia State Senate.  Many would argue that his money was well spent because all six of his candidates won.

Yet, despite Bloomberg’s efforts to keep a Democrat majority in the State Senate, the Virginia Republicans now have control of both state houses. 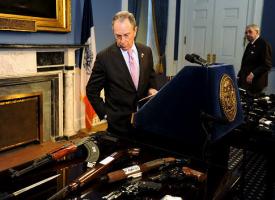 This means that the Virginia Senate that was once filled with 22 Democrats and 18 Republicans is now split evenly 20-20 with the tie-breaking vote going to GOP Lt. Gov. Bill Boiling who presides over the Senate.

If the Senate becomes gridlocked on hot-button issues such as gun control, abortion, traditional marriage due to partisan loyalties, Lt. Gov. Boiling will be the sole vote that decides whether the bills advance, either to the Republican controlled House or to the office of Republican Gov. Bob McDonnell.

Not everyone is thrilled with this new Republican-led Virginia.

Currently there are 10 gun bills that have passed the General Assembly and could, quite feasibly, pass the Senate.  One of those bills would effectively repeal Virginia’s handgun purchase mandate that makes it unlawful for any person who is not a licensed firearms dealer to purchase more than 1 handgun within any 30-day period