After reading NRA executive vice president Wayne LaPierre’s article, “Millions will defend the Second Amendment on Election Day,” in the Washington Times one has to ask the question, does LaPierre go too far with his Obama gun control, conspiracy rhetoric?  In other words, is LaPierre trying too hard to convince Americans that Obama is secretly out to get their guns?

Before those questions are addressed, one can certainly concede LaPierre’s main point, which is that gun owners have an impact on elections.

LaPierre wrote, “When our freedom and our values are at stake, we show up. We make a difference at the polls.”

LaPierre cited previous examples of the impact gun owners have had on elections “After the Clinton gun ban was shoved down the throats of Americans, gun owners turned out at the polls in record numbers and Democrats lost control of the House.”

He pointed to the 2000 election, which was one by the narrowest of margins, “when Al Gore campaigned for national gun control. Gun owners made the critical difference in key battleground states, including Arkansas, West Virginia, Mr. Gore’s home state of Tennessee and yes, even Florida” LaPierre wrote.

But then LaPierre went on to state that the Obama Administration is so keenly attuned to the power that gun owners have at the polls that it has resorted to political subterfuge to hide its anti-Second Amendment agenda.

“The Obama administration saw those historic battles and hatched a political conspiracy to deceive Americans and hide its true agenda to dismantle the Second Amendment and our freedom. By delaying its anti-gun legislative agenda, it’s tried to dupe gun owners into believing our fundamental freedom is safe.”

According to LaPierre, what typifies this covert Obama gun control conspiracy is Operation Fast and Furious – an attempt by the administration to “bolster claims that straw purchasers in the U.S. were the cause of Mexican drug cartel violence. So, the Justice Department conspired to allow, encourage and engage in illegal gun-smuggling, knowing full well that those thousands of guns were heading straight to the cartels. They ran a massive campaign out of the Department of Justice and the White House to manipulate the media and public opinion, when they knew the truth all along.” 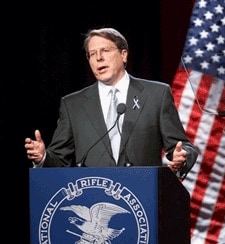 While it’s clear that Operation Fast and Furious was a colossal failure, and that there was prevarication and some stonewalling on behalf of the DOJ, one cannot prove by virtue of the evidence presented thus far during the congressional investigations that it was all a conspiracy to manipulate the media and/or pass gun control.  Moreover, it should be noted that the non-interdiction tactics (gun-walking, ‘controlled delivery,’ etc.) used in Operation Fast and Furious predate the Obama Administration.

LaPierre also attacked Obama for his involvement in the UN’s Small Arms Treaty, which he said, “could severely restrict or effectively ban civilian ownership of firearms worldwide.”  Well, what LaPierre conveniently leaves out is that in order for any UN treaty to be adopted by the US, the Senate must pass it by a two-thirds majority.  Currently, 57 senators have signed letter saying they would vote against any draconian arms treaty ratified by the UN.  So, while it’s possible for a UN treaty to be ratified, it’s unlikely that it would “severely restrict or effectively ban civilian ownership of firearms.”  And even if it did, the US would not adopt it.

Putting aside his conspiracy-laced rhetoric, LaPierre made several cogent points that warrant serious consideration.  He pointed out that Obama has appointed several liberal Justices, Sonia Sotomayor and Elena Kagan, whose stance on the Second Amendment is dubious at best.  And for many, this is the most convincing point to be made on the subject of Obama and his capacity to chip away at the Second Amendment.  That is, Obama can indirectly erode Second Amendment rights by appointing pro-gun control Justices.  After all, and in reality (given the fact that House of Representatives is largely pro-gun), this is probably the only way Obama will have a real impact on gun ownership and gun rights (there is, however, that border-state multiple purchases bill).

“The next president will likely appoint one and perhaps as many as three justices to the Supreme Court,” LaPierre wrote, “A second Obama term will mark the end of the Second Amendment, as we know it. That is a fact.”

While it’s difficult to share LaPierre’s apocalyptic certitude, one can certainly admit he has a point.  A point that would better served without the politically charged rhetoric, hyperbole and conspiracy accusations.

But by all accounts, the 2012 election will be decided by a very small margin of votes.  And it will be interesting to see how America’s 90 million gun owners make their mark on this election.