John Elliott tells us how his grandfather inspired his love of shooting: as a boy his granddad took him to King’s Beach to shoot a WWI German Mauser Gewehr 1898 rifle over the water, a rifle believed to be the very first battle-proven firearm to be used as an effective anti-tank weapon.

Dad mistakenly managed to shoot an owl out of the low-lying branches of a tree while on a leopard hunt in Africa in the dead of night during World War II, and his brother, Uncle Wayne, somehow shot the little finger off his left hand while experimenting with a homemade pistol way down in Corpus Christi, Texas in 1955.

Even despite those mishaps, my dad and uncle Wayne proved pivotal in inspiring an interest in firearms, but no one informed my life long love affair with shooting more than my grandfather.

My grandfather taught me a lot, both in my private and professional life.  He was the sheriff for Newport County in Rhode Island many, many years ago, and I can remember his advice to me when I first became a police officer: “Always keep your prisoner in front of you and maintain control of his movements.” That was awfully good advice back then, and I’ve never forgotten his words. But back to the guns.

I remember well one day when I was still shy of my teens and after he had retired from the force, my grandfather treated me to a little show and tell, starring his all time, favorite pistol, a Colt revolver (and a truly spectacular specimen if my memory serves me right).  I was content examining this miracle of measure and harmony, but my grandfather had something truly special in store for me.  He retrieved a rolled up oil-skin bundle out from up in the attic.

Like an archeologist unearthing something ancient, he began to gently unwrap the bundle, layer upon layer on his Formica kitchen table. When it was finally revealed, I was staring at a German Mauser Gewehr 1898 rifle and, although it was from the late 1800s, it looked brand new.
Granddad said that he had taken it off a dead German soldier in France during the last few months of World War I. “He popped his head up above the ditch,” granddad said, “and I got a lucky shot off.”

He explained that he took the rifle and some paperwork off the body, and carried the Mauser around for weeks before getting sent back to the rear lines where he had it boxed up and mailed stateside via an ocean liner. Apparently when my grandmother opened up the box back in Newport and saw the rifle, she had a fit and thought about throwing it out with the trash. Luckily cooler heads prevailed and she held onto it until my grandfather finally came home from the war.

The next day, after all my “wow granddad!” and “gee whizzes” wore off, he took me and that Mauser for a ride in his ancient Oldsmobile. We ended up on the pebble-strewn King’s Beach on the farthest southern stretch of Aquidneck Island for some target practice. Rhode Island, being little Rhode Island and not a whole lot of empty land space, we were going to shoot targets out over the water. Specifically, we were going to shoot up the tiny 20 foot lump of rocks called Seal Island about 100 yards out beyond the surf. By the end of that day we had shot off no less than 500 old green and rusty 7.92mm rounds, and I was hooked like a hapless trout at the wrong end of a long fishing line.  I wanted to shoot guns.

That particular rifle was one of the most important Mauser rifles ever built, and it was the standard German service rifle for World War I. It was extremely well made with a heavy duty bolt action and fired those 7.92mm rounds using five-round magazines. It would go on to serve as the basis for a great many rifles.

My grandfather’s rifle had standard iron sights, but some later sniper versions came with special sights, including various forms of optical sights (which was really quite unusual for the time period). The rifle’s claim to fame was that it was believed to be the very first battle-proven firearm to be used as an effective antitank weapon. 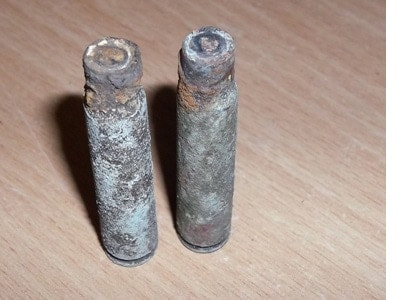 That distinction came about by the chance: accidentally, the Germans discovered that the armor of the first British tanks could be penetrated by reversing the bullets in the cartridge; the blunt end simply punched a hole through the armor before the bullet could warp. Hard to believe, but true nonetheless. I just have to wonder how that came about, but I would imagine that due to the exigent nature of combat, where fear and frantic actions are all mixed up in an emotional tidal wave, some poor German soldier must have tried loading his rounds in wrong order, thereby producing unexpected results, or they loaded one the wrong way in the shell casing, hence the blunt end stuck out. Something like that I guess.
The rifle’s overall length was 49.2 inches and its weight was about 9.25 pounds. It had a barrel length of 29.1 inches and a muzzle velocity of around 2,100 feet per second.

I don’t know what happened to my grandfather’s fantastic Mauser rifle, I didn’t end up with it unfortunately, but by the end of that summer spent in Newport he managed to instill in me a deep appreciation for the art of the long-distance shot. I never saw any seals on little Seal Island, and can only believe that after shooting at that lump of rock 100 yards out beyond the surf all summer long, if they ever had ventured up onto the island before we showed up, they must have decided it would be safer someplace else.