The thumbs forward grip is a truly awesome grip used to control muzzle flip in semi-automatic handguns and allows for fast follow-up shots. This grip is the secret technique of both tactical and competition pistol shooting and a great addition to any civilian self defense training regimen. Wanna learn more? Of course you do.

Without a doubt, writing – and making a short video clip – about the thumbs forward grip will stir some questions and invite some naysayers to chime in. Why? First, because we’re creatures of habit; we don’t like change – including changing our grip.

Secondly, introducing this grip on Guns.com, which grip is likely new to you, will bring some debate (even if only within your own mind) because as an intelligent human being you want to understand the mechanics of what’s really happening – you have questions and you want quality explanations. You want good explanations as to why to change what’s been “working” well for you all of these years.

Let me start by personally attesting to this unique, but highly effective semi-automatic pistol shooting grip.

In the past, I had won shooting competitions here and there, usually among local SWAT teams. In other words, I already had a decent trigger, an essential element for shooting well. However, once I hired on as an undercover Federal Air Marshal (FAM) things changed—for the better. I became a much better shooter.

Following the tragedies of Sept. 11, the FAM Service brought in some of the best special operations personnel and the best competition and tactical pistol trainers in the United States.  Since air marshals have the potential to draw a concealed weapon and shoot one or more terrorists on a commercial airplane, it is essential that the lethal, unnoticed sky sentries don’t miss. For that reason, air marshals have one of the most stringent and difficult shooting qualification courses within the law enforcement community. Air marshals have been called the best shooters in law enforcement.

Well, I tried the technique and, as mentioned, the results were amazing. During advanced training I won the Distinguished Top Gun Award, as well as the Steel on Steel Competition Award. Later, while assigned to the Chicago Field Office, I won the office’s first Stress Course, which included a combination of shooting and moving, multiple target engagement, and scored by accuracy and speed. 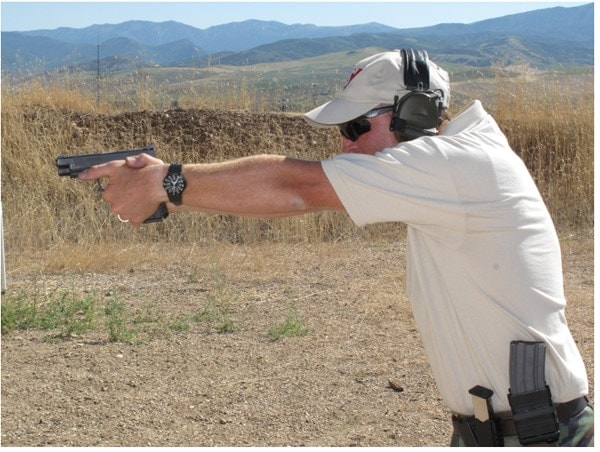 In short, thumbs forward grip took me to an entirely new level of shooting quick and accurately – elements that win gun fights. Grip the gun with an even squeeze with your strong hand (right for right-handed shooters, left for left-handed shooters).  Now, lay your offhand over your strong-hand with your thumb running parallel along (though really under) the barrel.  Be careful to keep your thumb low and away from the slide.  Catch a digit on that during the blowback and it could well spell stitches.  Finally, rest your strong-hand thumb over the back of your hand, close to wrist, supporting the grip along the outstretched thumb.  This essentially immobilizes the gun and reinforces the path of the imminent force following the shot and, in short, providing excellent recoil management.

When I first tried the grip it seemed odd and uncomfortable, but I was willing to try it. Boy, am I glad that I did. The results have been absolutely amazing. 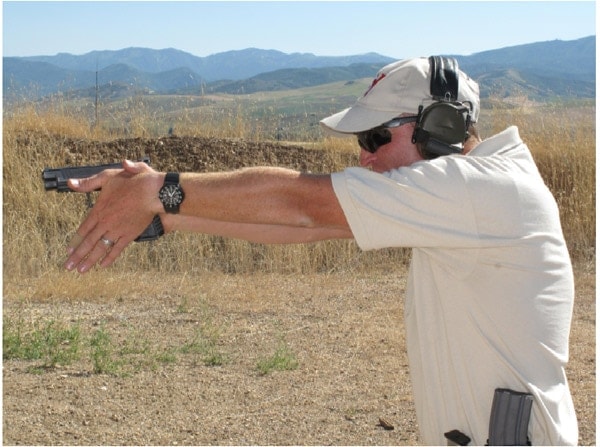 Even if you’re just a target shooter – static, upright and shooting only one bullseye target – this thumbs forward grip works very well. But it really gives a shooter a huge benefit tactically when moving and operating in a “real world” environment. The thumbs forward grip, if properly implemented, works incredibly well for recoil management, quicker multiple target acquisition and the majority of tactical scenarios any gun fighter will likely encounter. In that vein, it’s also a technique that works well under stress, when on the move and with body armor too because the technique tends to make your torso face the threat and in a natural and aggressive stance where body armor is the strongest.

However, this grip technique, when practiced to the point that it becomes a part of your shooting instincts, will make for a more versatile shooting aptitude, so, don’t just sit there. Call up a buddy. Make a man-date to meet at the range and try this new grip out.

Remember, always hone your skills and keep adding to your tactical toolbox.