The .17 Hornet is a variant of the .22 hornet, a high-velocity centerfire plinking, varminting, and target shooting round.

By necking down the .22 Hornet case, it’s possible to push a 20 grain boattail bullet over 3600 FPS; we’re talking about a pellet-sized projectile matching the trajectory of a .223 Remington bullet, with 592 foot-pounds of muzzle energy.  Hornady’s .17 Hornet is still supersonic after 500 yards of flight!

It may be a wildcat round, but that doesn’t mean there’s a lack of support.  Hornady has a reputation for factory-loading a lot of wildcat cartridges, but they have a nose for what’s good and what’s a fad, and they work with firearms manufacturers to make sure there’s going to be something to shoot with.

Already Savage announced that they would be pushing into the .17 Hornet market, starting with their Model 25.  Historically, Hornady has worked with Ruger and Marlin; their partnership is what has made the .17 HMR so popular.

We suspect it won’t be long before other companies like Henry or CZ start throwing their hats into the .17 Hornet ring. 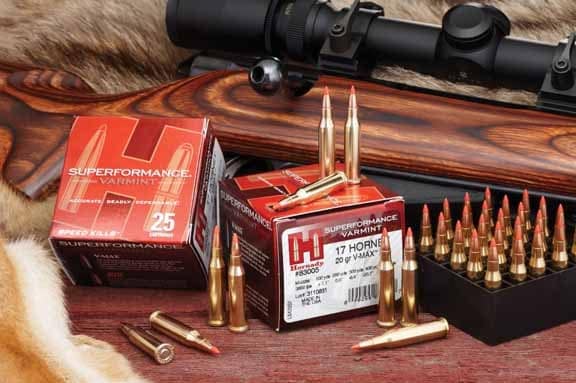 And while this is a centerfire cartridge, it’s not terribly expensive, either.  It’s still plenty cheap enough for varminting or practicing your silhouette shooting.  Hornady’s ammo runs about ten bucks for a box of 50; no more than other brands’ .17 Hornet, but it promises a level of performance that, if other companies want to compete with it, are gonna have to drop their prices by a good amount.

All in all, this is a good time for fans of this neat little wildcat.  We hope it succeeds as well as it shoots.