Venezuela has been the biggest adopter of the Russian AK-103 in the world, with at least 100,000 rifles in service. 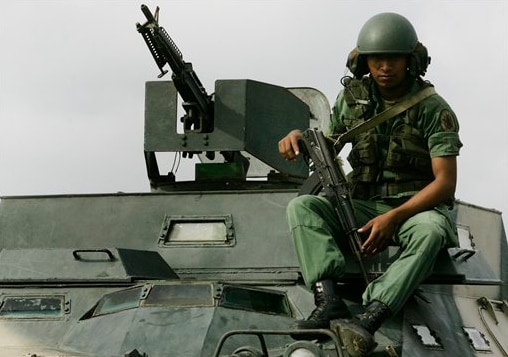 The AK-103 is a 7.62x39mm-chambered AK-74; it features all the enhancements of the AK-74 over the AK-47, but is chambered in the widely-surplussed 7.62 Russian caliber.  The main differences are both cosmetic and functional, but the action remains the same.  It uses the 74-style muzzle brake/flash hider, the 74-style forward handguard that’s grenade-launcher-ready, and the 74-style folding buttstock.

The furniture and magazine is all polymer, and without them and the muzzle device, the 103 would look a lot like the 47, but under closer inspection, there are other little differences.  It uses a 90-degree gas block, an AK-74 front sight block, differently-machined front and rear trunnions.  With the absolute tonnage of 7.62x39mm ammo outside of Russia, Russia capitalized on making a new rifles for export to use it.

Not to say there aren’t Russian AK-103 users; soldiers with the freedom to choose a rifle chambered in something other than 5.45x39mm often head straight to the current-generation .30 caliber AK.

But due to the cost of greasing the wheels, Venezuela can not afford sustained importation of the rifles from Russia, so they worked out a deal: import the machinery and build officially-licensed AK-103 rifles at home.  The plan was hatched three years ago.

“Normally, the AK-103 sells for about $800 each (including cleaning supplies, magazines, spare parts and the like.) But many of the AK-103s sold to Venezuela from Russia are being billed at $1200 each, the additional $400 going into the pockets of Venezuelan politicians who got behind the weapons purchase and distribution (to friends of the current Venezuelan government) of the weapons. New weapons, old traditions. Venezuela could have bought newly manufactured (but not by Russia) AK-47s for $400. But this purchase was not so much about weapons, as it was about politics.

“Russia is eager to encourage licensed production of the AK series of rifles.”

That was in 2008.  Turns out, it was pretty hard to get things up and running.

“The diplomat said that ‘The execution of the project is taking place as per the established parameters. Technological equipments are almost ready. There is a delay in construction works due to the usual problems faced by any company carrying out works in a foreign country and due to bad weather conditions last year. Heavy rains and electricity rationing have slowed down the pace of construction works,’ reported the website Infodefensa.com.”

So instead, Russia will get paid a small amount for each rifle they won’t be building.  It will probably add up to quite a lot; in addition to building the facility, Venezuela has plans to make at least 50,000 new rifles a year.

And if they decide they want to export them somewhere, you know, a little further north, we’re pretty sure complaints would be few and far-between…

What would you spend on a brand-new, uh, American-made (South American) AK-100-series rifle?