Guns.com Talks with Larry Potterfield about the Secret to MidwayUSA’s Success (Part 2 of 3)

This is Part 2 of a 3 part interview with Larry Potterfield from MidwayUSA.  You can read Part 1 here.

I’d known that Larry Potterfield was an avid shooter and hunter for a long time. You can’t move in the ‘firearms enthusiast’ circles here in Columbia, Missouri without hearing plenty about him not only selling a hefty amount of shooting kit but also actually enjoying the shooting sports. Likewise, Steve, one of my BBTI co-conspirators, used to do a fair amount of shot-gunning with him, ‘back in the day.’

I also knew (as most shooters who aren’t living under rocks know) about his extensive series of shorts on gun safety and gunsmithing – the MidwayUSA YouTube channel has like 450 videos featuring Larry. Then there’s the Video Library on MidwayUSA’s website. 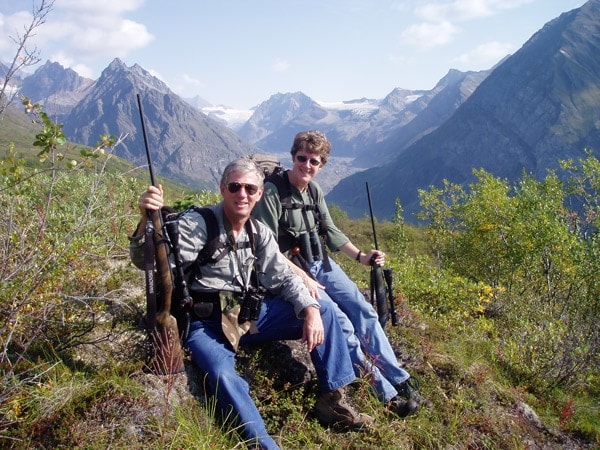 I also knew about the work he has done to support the Second Amendment, both through the “NRA Round Up” program he started in 1992 (which has raised over $8 million to date, over $6 million directly through MidwayUSA), sponsoring the Bianchi Cup, and looking to the future with The Scholastic Shooting Sports Foundation, Inc. And that’s just the short list of the things he has done to support the shooting sports and to help protect our 2nd Amendment rights.

But, to be perfectly cynical, all of this is in line with what you would expect from someone who has a company dependent on the firearms community.  It’s smart business for MidwayUSA to support these causes and having Larry be the “face” of MidwayUSA is good branding.  But as we toured the MidwayUSA campus, I saw plenty of evidence that his devotion to guns isn’t an act at all—this is his life and his passion. 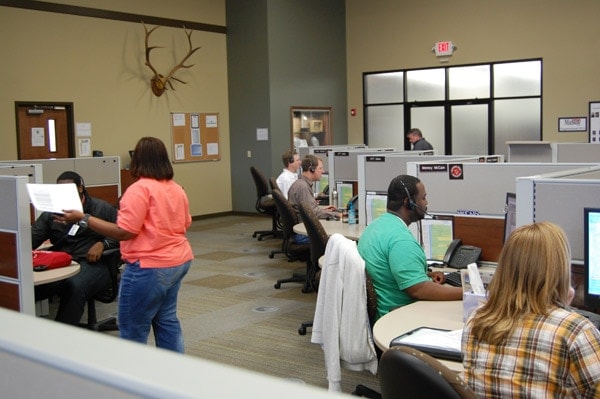 There are little “NRA Member” stickers next to people’s name plaques on their offices and cubicles, and whole departments tout their allegiance to America’s oldest Civil Rights organization as if they have 100% NRA membership (I really don’t know if they do or not, but it sure seemed like it). There are plenty of game animals, mounted and displayed, and photos from hunts and shooting events people have attended, Larry foremost among them. There are no signs anywhere restricting the rights of CCW holders to carry on the premises, and I could find nothing in the company policies that so much as mentioned anything about guns for employees – which is highly unusual for any large business, even here in gun-friendly Missouri.

As I mentioned in my previous article, Larry was able to converse about the products we passed in the warehouse stacks, which also mean holding some pretty darn next level discussions about reloading components and how to overcome problems.  He spoke in a completely natural manner about his products and their use, demonstrating a knowledge base and understanding of what makes cartridges go bang that was well beyond my own. Not that I’m any great shakes at reloading, but you’d need more than a casual knowledge of the craft to be able to keep up with him.

So, in the context of a gun guy throw-down, I was convinced. And then we got to his workshop.  Well, it’s also a television studio. But it’s primarily a gunsmith’s workshop—and one that would turn any craftsman green with envy. 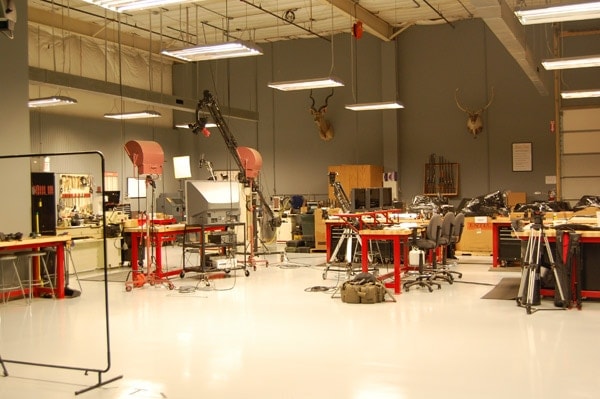 I’m not sure why, but I had assumed that all the videos and whatnot were done at some production facility, probably out on the west coast.  Larry might go out for a couple of weeks a year, record a whole bunch of these topics and leave the rest of the production to be sorted out later.

Nope. It’s all done on the MidwayUSA campus. The shop is very large, with three excellent large workbenches and just about every tool you could want or have wanted to fabricate. There was also plenty of room for the video crews to record “the talent” from just about any angle necessary and this visual cue is about as good of a seque as any into the real soul of this place.  What one couldn’t ignore if they tried when taking in this tinkerer’s playground is that this workshop was the end product of a very personal vision.

Here you had quite possibly the most perfectly designed environment to explore the function of firearms and disseminate that information to an eager nation. Everything seemed not just tailored to the task, but tailored to Larry’s methods and personality. 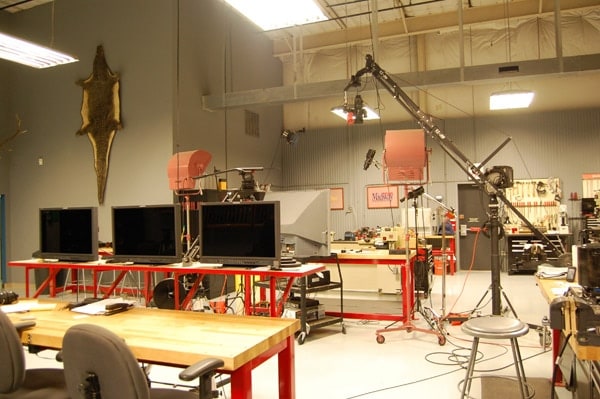 Why? Well, it’s simple.  Because Larry really likes to do gunsmithing himself and he likes to share this love with the world. That’s it. That’s the secret, and I think the key to everything else you need to understand about why MidwayUSA works the way it does: it makes its owner happy.

Sure, they schedule shoots, and I’m sure a lot of people have to coordinate everything. The videos (the results of which are pretty slick) are pro because folks are paid to make them pro and the crew I’m sure is instrumental in making sure Larry’s unique persona comes across on camera.

But it’s not Larry just following some script. This is something that he really enjoys and that’s what you’re seeing in his videos. I could see that instantly when he got out the Nearly Perfect Safari Rifle and set it on one of the benches. It’s his baby, his work of art. He started to share with me some of the details of the work that has gone into it, and it wasn’t Larry Potterfield, Founder and CEO of MidwayUSA who was talking to a reporter. Nope. It was one craftsman sharing his love of craft with another. Because see, when we first started talking back in his main office, Larry asked me whether I was a full-time writer for Guns.com. I explained that no, it was a sideline for me, that professionally I was a conservator of rare books & documents. That piqued his interest, and he asked about the work I did, drinking in what I said about my craft involving a lot of working with my hands. In his workshop I realized why that interested him so much: because he’s a craftsman as well.

I complimented him on the gun, and the whole set-up. He looked at me, said: “Well, it helps me relax. And we figured, since I like doing this, and am good at it, might as well make use of it to entertain and do a little education.”

We went from the workshop around the corner to where they do the post-production work on the videos. And there, stuck away in a corner, is another office Larry has, a non-public one. Maybe it’s his original office, I’m not sure. It’s smaller. It’s jammed with books, and manuals, and guns. Old guns. The table in the back behind the desk was littered with a bunch of revolvers – mostly old Smith & Wesson break-tops. These are guns he’s interested in, and most likely future gun-smithing projects.

Projects that will likely make their way onto YouTube, and/or be hosted on MidwayUSA’s own site. Because it’s good business. But mostly because it makes Larry Potterfield happy.

Next:  Larry Potterfield on the possibility of MidwayUSA Retail Outlets?