For those of you unfamiliar with this unofficial grassroots holiday that started back circa 2002, the purpose of National Ammo Day “is to make it known that ammunition is in the hands of LAW ABIDING CITIZENS, not to frighten anyone or put ammunition in the hands of criminals” according to Ammoday.com

To achieve this display of responsible Ammo usage, there are two overlapping goals:

Goal One: It’s a national BUYcott of ammunition, so each person is supposed to purchase 100 rounds of ammo.

Goal Two: The goal of National Ammo Day is to empty the ammunition from the shelves of your local gun store, sporting goods, or hardware store and put that ammunition in the hands of law-abiding citizens. 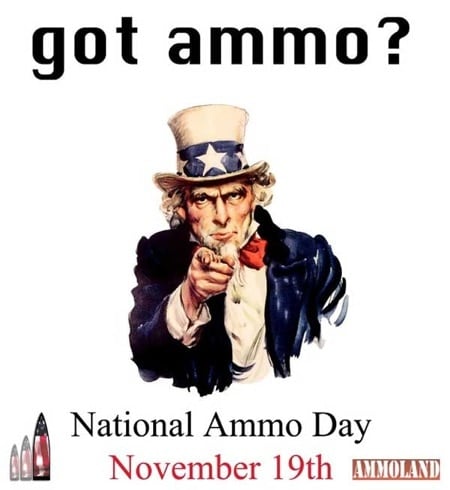 According to event organizers, there are an estimated 75 MILLION gun owners in the United States of America.  If each gun owner or Second Amendment supporter buys 100 rounds of ammunition, that’s 7.5 BILLION rounds in the hands of law-abiding citizens.

In other words, it’s a way of voting with our dollars.  Showing the powers that be that we love our guns and we use them responsibly.

For those who can’t make it out tomorrow to buy some ammo, don’t fret.  You have until the 26th to make a purchase to be considered a participant of this year’s Ammo Day/Week (see Calendar). 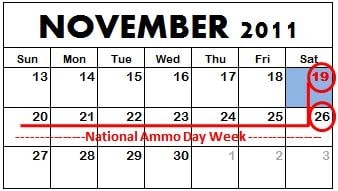 Lastly, event organizers want to remind you that:

It is CRITICAL that you comply with all the laws of your state and locale if you participate in National Ammo Day/Week.

Before purchasing guns or ammunition, review the laws and safety issues for proper handling and storage.  Don’t give the gun-grabbers any “ammo” to use against us!

If you choose to participate, feel free to post pics below or tell us of your plans to purchase ammo, i.e., what are you buying and what are you shooting.