The Beretta Nano is Shipping! (VIDEO)

We’ve been looking forward to getting our hands on a Beretta Nano since they were first captured in pictures all those months back.  We’ve been following the Nano Project videos, which made us want to shoot one more, and finally, we got a Nano for review and really liked it.

“The Nano feels like a Mini Cooper with a V8. I’m proud of this simile. I think it is perfect. The Nano isn’t a go-cart and it isn’t a racecar.

“I was not disappointed at all with the Nano. The trigger pull on most double action only guns can be an impediment to targeted shots, but not with the Nano. From 25 feet I could predictably scare a spot the size of a quarter.” 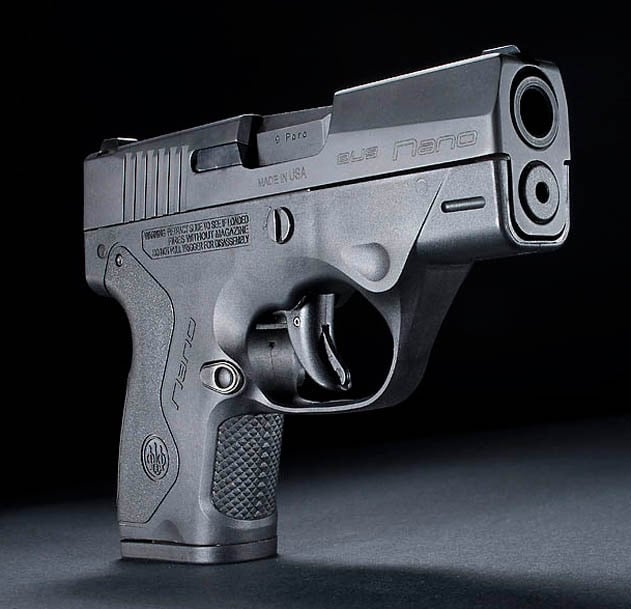 The Nano is a a striker-fired, single-stack sub-compact in 9mm, and Beretta has plans for a .40 S&W in the near future.  Actually, the pistol is rated for .40 S&W recoil and pressure, but chambered in the more popular (for concealed carry) 9mm.

Which is precisely what the Nano was designed for.  As the name implies, the gun’s small.  It’s 5½ inches long with a three-inch barrel, it’s just a hair over four inches tall, and nine-tenths of an inch wide.  Dry, it weights just under eighteen ounces.  It holds 6+1 rounds of ammo, and is available in black Pronox finish on black polymer.  Right now, the Nano is available only with 3-dot sights, but Beretta will be offering user-installable night sights.

The Nano also has one interesting feature that we hope Beretta takes advantage of.  The grip and the frame are separate; the frame or lower of the Nano is a metal insert that is caliber- and grip-independent.  That means that, down the road, it would be possible to get caliber-conversion kits for it, or use different sized grips and slides; one Nano configuration for carry, one for the range.

But all that’s speculation.  What we do know is the price.  With Beretta shipping, you can find the Nano in stores for right around $400, sometimes less.  No more champing at the bit; the wait is over.