It’s often been said that there’s a time and a place for everything.

So, for example, when eleven survivors and family members of victims of the January 2011 shooting in Tucson, AZ, that almost fatally wounded Rep. Gabrielle Giffords (D-AZ), gathered in the nation’s capital at a hearing to support legislation (Fix Gun Checks Act) that would address alleged deficiencies in the FBI’s National Instant Criminal Background Check System, was this the appropriate time and the place to question a federal agent on Operation: Fast and Furious?

Well, Sen. Chuck Grassley believed it was and, to the chagrin of some of those in attendance, he proceeded to grill FBI official David Cuthbertson about his knowledge of the failed gun-walking operation that allowed upwards of 2,000 guns to cross the U.S.-Mexico border undeterred (see video).

Now Sen. Grassley is receiving a fair deal of criticism for his decision to press agent Cuthbertson on Fast and Furious at the hearing for the Fix Gun Checks Act, a bill sponsored by Charles Schumer (D-NY) and designed to ensure that “all individuals who should be prohibited from buying a firearm are listed in the national instant criminal background check system and require a background check for every firearm sale.”

The leader reads, “We write to express our profound disappointment with your dismissive and political response to Patricia’s testimony, your obvious disregard for gun violence survivors in the room, and your apparent ignorance of the deadly serious issue we came to discuss with you.” 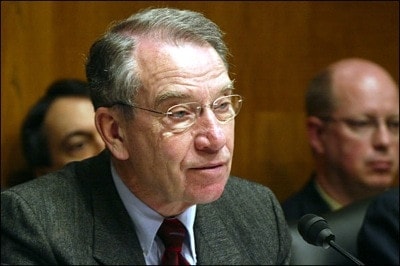 They also lampooned Sen. Grassley for using his Blackberry during the proceedings, “Senator, were you listening when Patricia told you about Dorthy Morris, Dorwan Stoddard…?   Nothing you had to say indicated you were.  The fact that you were focused on your Blackberry during much of Patricia’s testimony suggests you weren’t.”

A spokeswoman for Sen. Grassley responded to the letter, she told TPM.com, “that he heard the concerns of the victims from Ms. Masich’s testimony and he understands the impact of gun violence on all victims.”

And in a written statement to TPM.com, Grassley defended his inquiry by saying that he “gave his word” to the family of slain Border Patrol Agent Brian Terry that he “would take every opportunity to question officials who might have information about the program, and to ensure that there are not more victims of gun violence as a result of the government’s flawed policies.”

It should be noted that Grassley did question the merits of the Fix Gun Checks Act.  Not all his questions were about Fast and Furious.  He brought up several of the Constitutional concerns the Act raises and at one point asked, “Isn’t it possible that this bill will become a new deterrent for those who need mental health counseling because they’re afraid to seek it for fear of losing their Second Amendment rights?”

So what’s your take?  Did Sen. Grassley misuse his authority?  Should he have brought up Operation Fast and Furious at the hearing for the Fix Gun Checks Act?  Was his line of questioning, as described in the letter, “a tactic of callous, cold, and calculated distraction”?