CZ is updating their polymer service pistol, the P-07 Duty.  The new pistols will be available in olive drab green, desert tan, and black, naturally, but the changes are more than skin deep.

In addition to a little re-engineering, CZ will be offering P-07s suppressor-ready.

The major upgrade these pistols will be seeing is absolutely not cosmetic.  The new Duty pistol frames will have a greater amount of glass in the polymer, making it stiffer.  One of the complaints, well, about the only complaint the P-07 ever received was the plastics used for the frame and the sights.  It just wasn’t stiff enough. 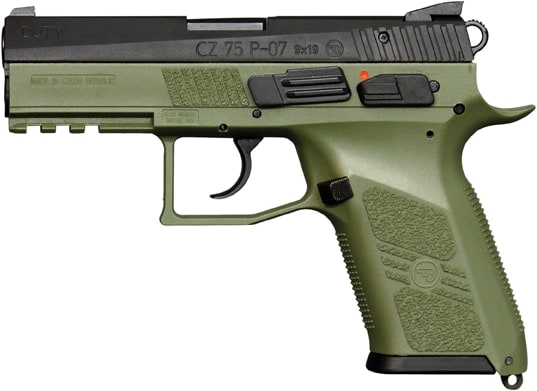 Over time, the slide stop spring would press on the inside of the frame and actually cause it to bulge outward.  This doesn’t affect the performance of the gun, it just looks funny, like a “hog-nosed” Glock.  Making the polymer harder ought to prevent it.

The P-07 will retain all other features that make it an interesting pistol; it uses CZ’s famous slide/barrel/frame setup, where the slide runs inside the frame, lowering the overall firearm height and reducing felt recoil, the swept notch-and-post sights, (now made of metal) and the Omega trigger (which out of the box is nicer than the standard CZ trigger) which can be converted from safety to decocker without any tools. 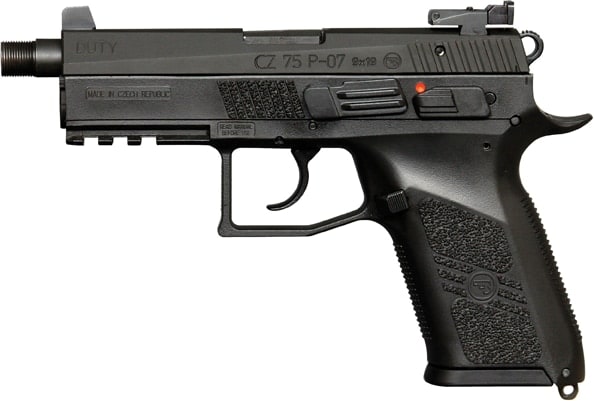 The new P-07s will be offered in colors as well as a special-duty version with an extended, threaded barrel and raised sights that will peep over silencers up to one inch in diameter.

Also slated for 2012 is the CZ P-09 Duty, which is a full-size version of the P-07, with a 4.7″ barrel and a 20+1 capacity.  Once scheduled with a different name for the fourth quarter of 2011, the P-09 was delayed to change the name; the original handgun was called the P-08 and CZ decided to change the name due to its association with the German Luger.  The full size is also expected to have interchangeable backstraps. Both pistols will be offered in multiple colors and with extended, threaded barrels.  We also expect their prices to remain the same, or well under $500.