Webley & Scott might not be a household name in shotguns like Mossberg or Remington, but they do know a thing or two about shotguns.  They’re one of England’s oldest firearms manufacturers still around, since 1790, although technically, they don’t make guns anymore, they assemble them.

Webleys like their new 2012 are manufactured in Turkey, as so many shotgun companies often do.  But their fit and finish are a perfect match of the firearms Webley was renown for, and the 2012 is no exception.

“Finished in an attractive mixture of bronzes, browns, purples and blues, the colour case hardened finish transforms the Italian inspired mechanical boxlock action way beyond that of any mass produced engraving.

Granted its chemical and not bone and leather, but add into this the gold inlaid Webley & Scott and 2012 nomenclatures, and the effect is complete even down to the top and bottom tangs along with the forend latch and irons,  impressive attention to detail for a gun of this type.

Only the short throw top-lever, manual safety and trigger guard have been omitted, their deep black finish complimenting the barrels.”

They are made with 28- or 30-inch barrels, and come in F (Field) and S (Sport) designations; field guns will have traditional bead sights and 7mm ribs, whereas the sport shotguns will have fiber-optic front sights and 10mm ribs.  All non-barrel parts are machined from a single billet of chrome-moly steel, receiver, trigger, the works. 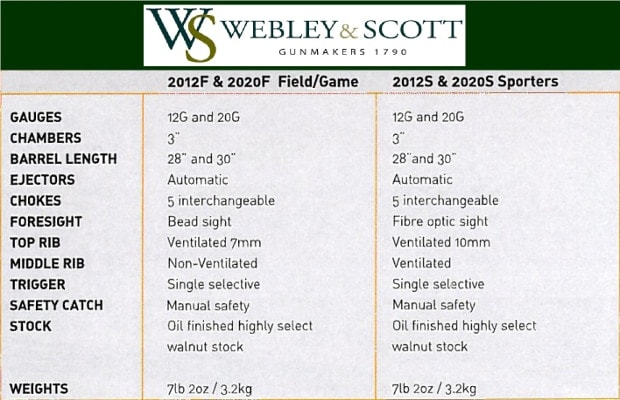 They will have engraved Turkish walnut stocks and genuine bone charcoal case-hardened finishing.  Of course, when a shotgun is half work of art, half firearm, you do pay more; the shotguns have an English MSRP of £1,300, or about $2,000 United States dollars.  We don’t know what they’re going to be priced at when they get here, but that’s a pretty good idea.

If you’re been waiting to get a fancy new shotgun for hunting or competing with, you might want to sit tight ’til you lay eyes on one of these.