Matt Harter is an ambitious young man.  At the age of 24 he became mayor of La Crosse, WI, a city that has upwards of 50,000 residents.  And during his tenure as mayor, he has had to make some tough, and what some might deem ‘controversial,’ decisions.

This past Wednesday was one of those days for Mayor Harter.  That is, to the chagrin of the La Crosse Common Council, he vetoed a ban on carrying concealed weapons into City Hall as well as other municipal buildings.

Harter issued his veto just before the 5 p.m. deadline, arguing in a written statement the ordinance would “take away the rights of trained and properly licensed individuals to carry arms,” the La Crosse Tribune reported. 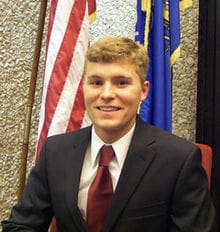 Harter said that while he “valued the council’s desire to keep public spaces and special events safe,” the ordinance would not have that effect.

“Those with criminal intent are not going to be deterred by placing a sign at the front door or by declaring the prohibition of concealed weapons,” Harter statement read.

Allowing concealed carry would “ensure the rights and safety of all citizens at all times,” Harter wrote.

Now the Common Council will need to re-vote on the measure and net a two-thirds majority to override the Mayor’s veto.

Unfortunately, that appears likely, as the council approved the ban 16-1.

Doug Happel, the council member who introduced the ordinance, called the mayor’s decision to veto, “disappointing.”

“I think the mayor is not being very respectful of the city employees for whom this is a workplace,” Happel told the La Crosse Tribune.