The Bureau of Alcohol, Tobacco, Firearms and Explosives’ plan to ban the import of tactical/military shotguns has been stymied by a brief but important provision hiding in plain sight within a 160-page appropriations bill.

The provision subverts the ATF’s ability to block the import of shotguns based upon their ATF-defined purpose, i.e. military vs. sport.

See, earlier this year in January the ATF released a “Study on the Importability of Certain Shotguns.”  The study found that “military shotguns, or shotguns with common military features that are unsuitable for traditional shotgun sports” should be banned from import into the U.S.

The provision to block the imminent ban was included as part of the Fiscal Year 2012 Agriculture, Commerce/Justice/Science (CJS) and Transportation/Housing/Urban Development (THUD) Appropriations bills (aka the“Mini-Bus”) and was signed into Law by President Obama this past Friday.

Here is a copy of the new law:

SEC. 541. None of the funds made available by this Act may be used to pay the salaries or expenses of personnel to deny, or fail to act on, an application for the importation of any model of shotgun if–

(1) all other requirements of law with respect to the proposed importation are met; and
(2) no application for the importation of such model of shotgun, in the same configuration, had been denied by the Attorney General prior to January 1, 2011, on the basis that the shotgun was not particularly suitable for or readily adaptable to sporting purposes.

In other words, funds can’t be used to enforce the ATF’s findings within the “Study on the Importability of Certain Shotguns.” 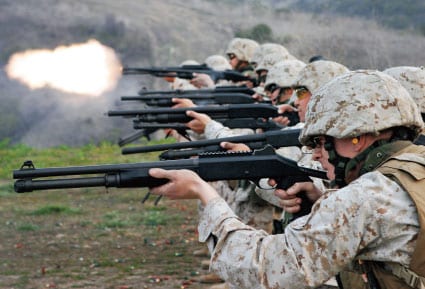 To get a better understanding of the ATF criteria used to determine a shotgun’s “importability” and “purpose,” one should take a look at their study:

In reviewing the shotguns used for those activities classified as sporting purposes, the working group examined State hunting laws, rules, and guidelines for shooting competitions and shooting organizations; industry advertisements and literature; scholarly and historical publications; and statistics on participation in the respective shooting sports.

Following this review, the working group determined that certain shotgun features are not particularly suitable or readily adaptable for sporting purposes.

These features include:
1.    Folding, telescoping, or collapsible stocks;
2.    bayonet lugs;
3.    flash suppressors;
4.    magazines over 5 rounds, or a drum magazine;
5.    grenade-launcher mounts;
6.    integrated rail systems (other than on top of the receiver or barrel);
7.    light enhancing devices;
8.    excessive weight (greater than 10 pounds for 12 gauge or smaller);
9.    excessive bulk (greater than 3 inches in width and/or greater than 4 inches in depth);
10.    forward pistol grips or other protruding parts designed or used for gripping the shotgun with the shooterfs extended hand.

Although the features listed above do not represent an exhaustive list of possible shotgun features, designs or characteristics, the working group determined that shotguns with any one of these features are most appropriate for military or law enforcement use. Therefore, shotguns containing any of these features are not particularly suitable for nor readily adaptable to generally recognized sporting purposes such as hunting, trap, sporting clay, and skeet shooting. Each of these features and an analysis of each of the determinations are included within the main body of the report.

The purpose of this study is to establish criteria that the Bureau of Alcohol, Tobacco, Firearms and Explosives (ATF) will use to determine the importability of certain shotguns under the provisions of the Gun Control Act of 1968 (GCA).