Machine Gun Vegas, the First Ever Gun Range Nightclub, to Open in Las Vegas for 2012

After over 20 years of watching the gun industry empty its pockets at the annual SHOT Show, it seems Sin City financiers finally read the shooting world’s poker face and are currently in the process of going all in on a brand new, state of the art, gun-themed lounge and nightclub called Machine Gun Vegas, slated to open its doors in early 2012.

Located behind the Mirage hotel on Vegas’ central strip, the $5 million dollar facility will feature everything we’ve come to expect from a high end shooting venues in the millennium’s second decade: luxurious amenities, a firearm arsenal with a million dollar price tag, and, of course, smoking hot girls with guns.

Boasting over 10,000-square-feet of space and 16 ranges catering to both private parties as well as Joe Shmoe off the street, shooters at Machine Gun Vegas will find themselves immersed in Las Vegas’ re-imagining of when shooters dream.  They have not released any photos of the facility yet, but from what our sources are telling us, we’ve heard large flat-screens TVs and iMacs factor in in a big way.  To open the floor to wild speculation, we’re guessing hoping this means diagnostic tools that will help you better understand your shooting performance.  Refreshments are gratis and you can take a break from the action in a plush clubhouse environment.

Club developer Genghis Cohen (who we can only assume is either a major character in a Thomas Pynchon novel or one tough Asian Jew), cooked the project up, styling, in his words, Machine Gun Vegas as America’s first and only “ultra gun lounge”.

He told the UK’s Daily Mail that: “Machine Guns Vegas has changed everything. We’re the first luxury, dedicated gun lounge in the world.”

So what was that you said about million dollar arsenal?  After months minutes of research, all we can confirm is that there will be full auto Tommy guns and M60s, but our gut tells us this doesn’t even scratch the surface of the firearms Machine Gun Vegas will offer its patrons. It’s Vegas, baby.  You think they’re going to let some folks from Scottsdale, Arizona show them up?

The million-dollar question is of course, will they be serving booze, and the answer is, thankfully, an emphatic, no.

This gets the Guns.com seal of approval, not the least because guns and alcohol never mix, but also because we’d bet the farm this will keep the casual riff raff on the strip.  Just think about it: asking the average hopplehead to choose between a nightclub with alcohol or a nightclub without alcohol is like asking someone if prefer to have sex with their clothes on or off.  A dry county policy will go miles to ensure people are headed to Machine Gun Vegas for the right reasons to relax i.e. the machine guns and not because they’re loaded.

Plus, there’s apparently going to be distraction enough with Playboy Playmate inspired “Range Mistresses” (yeah that’s what we hear they’re calling them) taking care of the range and retail duties.  These young ladies (club spokes-girl Jeannie Duffy to your right) are all NRA certified Range Safety Officers and all under the supervision of Machine Guns Vegas Director of Training Michael Heck, a former Las Vegas Metro police officer and the new range’s Director of Training.  Explaining the club’s grand concept, Heck said:

“On the front end, you’re going to see a sales host that may have been on the pages of Playboy last year, and now she’s our sales host. She’s thoroughly familiar with the firearms industry. By the time you make it out on the range, you’re probably going to be greeted by range masters that have done two or three tours in Iraq and Afghanistan.”

Yes, Machine Guns Vegas will also have some world-class firearms experts (many with military experience) on staff.  He continued:

“We’re going to do something a little more high-end here, where the shoot club meets the nightclub. It’s Vegas… we’re trying to put the sin back in Sin City.” 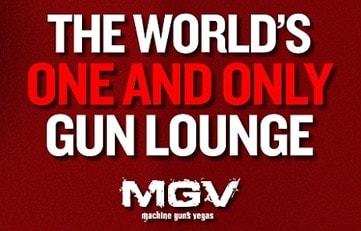 Not to split hairs here, Heck, but nightclubs and guns isn’t exactly a new concept in modern day America. Heck, you’d be hard pressed to find a gun range in the US that hasn’t been a shooting range at one time or another.

Still, jokes aside, Machine Gun Vegas is pretty much “a can’t miss” idea, to call a spade a spade.  Hot chicks and guns is the crack cocaine of gun marketing and it makes one wonder why it took Vegas this long to officially get on the trolley. Las Vegas is no stranger to either nightclubs or gun ranges, so even if Guns.com won’t be able to afford five minutes at Machine Gun Vegas, we’re really interested to see what the final project looks like.  Anything that sticks guns (metaphorically) in America’s face is a good thing.