The Past, Present and Future of Combat Shotguns

Originally the combat shotgun was a 16th century Dutch invention, however, it was rapidly adopted by the Prussians, Brits and Austrians as warfare stalwarts. They started out as blunderbusses, which were an enhancement on the smooth bore musket with a flared muzzle (but sometimes seen with a flared barrel as well), they were much shorter and more versatile as a military offensive tool, but equally as effective as defensive weapons, too.

These ancient pieces shot an odd mix called buck and ball, which contains a .65-.69-caliber ball and three buckshot pellets loaded on top of the ball in a paper cartridge. To work, the paper had to be torn at the bottom, exposing powder, to spark after the charge was rammed down the barrel. With indiscriminate aim, a shooter could cause horrific damage. The increased number of projectiles compensated for the lack of accuracy and produced withering fire under combat conditions. 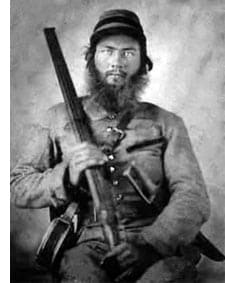 George Washington was a huge proponent of the buck and ball in all firearms during the American Revolutionary War. Although specialized loads were around for a long time, they actually remained dormant until the mid 19th century because that’s when, spurred on by the improvements in hunting shotguns, it really caught on as a combat load.

The side-by-side or ‘double barrel’ cut off ‘scatter gun’ was widely employed in the Civil War usually by cavalry units as they could help prevent a rider being swarmed by enemies on foot.

The modernized repeating pump shotgun was adopted by the US Marines Corps under General ‘Black Jack’ Pershing in 1916. Pershing utilized these ‘riot guns’ in the Marines’ pursuit of Pancho Villa.

The pump was quickly taken up by civilian police units, but the modern combat shotgun was actually developed by the American Expeditionary Force in WWI as a trench gun. The issued model was the Winchester Model 97, and it was popular, especially for the troops, because had the ability to “slam fire,” meaning troops could hold down the trigger and pump and at the end of each pump a shot would fire – a popular technique for deflecting grenades and clearing men out of trenches.

It was so effective that the German Government lodged a diplomatic protest claiming the shotguns elicited excessive injury in the trench warfare and that any US troops captured in possession of one would be executed. The US discarded the claims immediately and offered instant reprisals to any German execution of Americans. The Germans dropped the protest.

And today the very same Marine Corps still use a pump, or the more innovative semi-auto for their deeds. It’s called a Benelli M4, a gas-operated tactical shotgun. 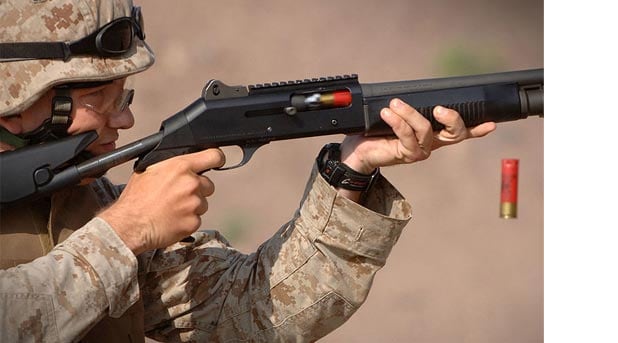 The list of armed conflicts is endless where shotguns have played a part, but the newest combat shotguns are exciting. Spearheaded by the Military Police System, the Auto Assault 12 (also seen as the Daewoo AA-12) seems to be the all round combat shotgun of the future. It is a gas operated, low recoil fully automatic that fires around 300 rounds per minute. The AA 12 has an array of ammunition for any situation including a missile anti tank round, the Frag 12, accurate at up to 175 meters.  That is a lot of lead emanating from one source.

The future of combat shotguns is strong and there’s no doubt, whether door busting, trench fighting, or tank destroying, there will always be a role for them.