The US Army is considering replacing its M4 carbine.  And should the Army decide to make a change, the US Marine Corps said they will not follow suit, but will instead settle on improving its fleet of M16A4s and M4s, acquisition officials told lawmakers Wednesday.

“There is no replacement for the [M4] carbine,” said Brig. Gen. Daniel O’Donohue, director of the Capabilities Development Directorate, Combat Development and Integration for the Marine Corps.

“We have looked hard at our infantry weapons, and there are several aspects of it — How do you train the Marine? What ammunition do you use? And the weapon itself,” O’Donohue said. “We believe the most cost-proficient means of meeting our profile is a product improvement to the M16A4.” 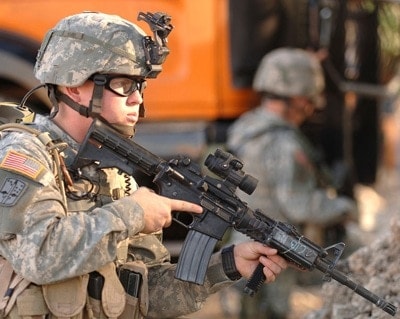 While the Marine Corps seems content with minor improvements to the M4 and M16A4, the Army has been fielding offers to replace the M4, made by Colt Defense LLC, since they held an invitation-only Industry Day back in Nov. 2008.

Issues with the M4’s performance under extreme conditions have been well documented.  Iin 2007, the M4 was tested against several other combat weapons including the FN SCAR, the HK XM8 and the HK416. Ten of each rifle were fired 6,000 times each in extreme dust conditions. The M4 suffered the highest incidence of malfunction with 882 stoppages. The XM8 had the fewest stoppages with only 127. The FN SCAR suffered 226 stoppages.

Although the Marine Corps will not be choosing a new individual carbine in the near future, Marine infantry squads have elected to replace their M249 light machine gun with the highly accurate M27 beginning Feb. 2012, said Brig. Gen. Frank Kelley, commander Marine Corps Systems Command.

“A few have already fielded in Afghanistan in a limited quantity to get our Marines’ assessment, and it’s performing exceptionally well,” Brig. Gen. Kelly said.  He added that the Marines should finish fielding more than 4,000 M27s in April 2013.

Question: If the Marines were to replace the M4 and M16A4, what would be the best replacement in your opinion?