In the spring of 2010 I received an email from European Cartridge Unlimited (ECU), a Greece-based manufacturer of reloading components, containing information on an interesting new 12 gauge slug called the USS (Ultra Solid Smoothbore).

These slugs, which are currently offered as components for handloading, consist of a milled, solid brass, flat point projectile encased within and mechanically locked to a stabilizing wad. 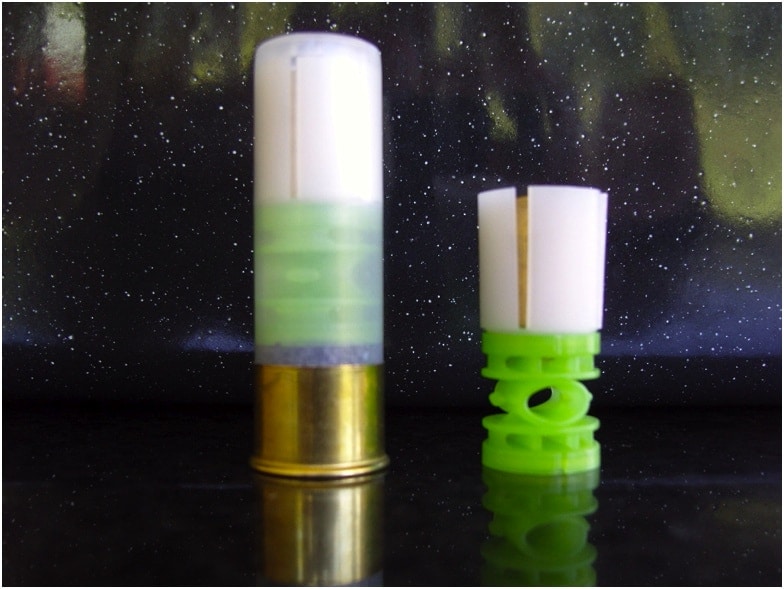 The diameter of the bare, brass, projectile is .690″ with a meplat diameter of .510″.  Currently, the slugs are offered in three different weights for three different hull lengths: 570 grains for 2.75 inch hulls, 700 grains for 3 inch hulls, and 970 grains for 3.5 inch hulls.  Having an undying interest in all things shotgun slug, I just had to get my hands on a sample of these heavy hitters.  I emailed the company and they were generous enough to send me a box of their 570 grain slugs to try out.

According to company representatives, the USS slug was formed to fill a niche in the smooth bore slug market. In Greece, the only firearms legal for hunting both large and small game are smooth bore shotguns.  Further, the only big game animals that can legally be hunted are wild boar, which are known for being tough and often ornery quarry. It was felt that existing smoothbore slug technology (which has been fairly static for quite some time) left much to be desired when pursuing boar and other large, dangerous game animals. These factors ultimately lead to the development of the USS slug. 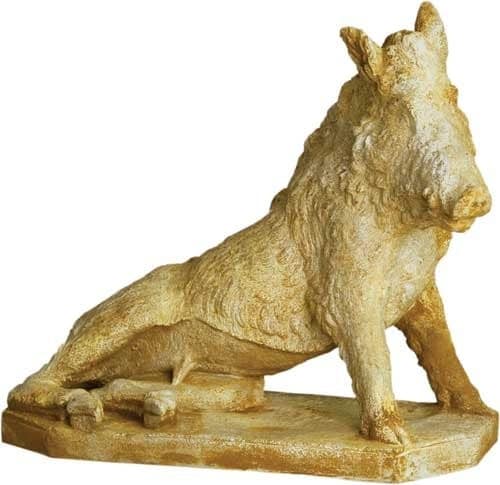 The first challenge in testing the slugs was working up a good load.  Currently, all load data for USS slugs uses a powder called Vectan SP2. Unfortunately, Vectan powders seem to be practically nonexistent in the United States and similarly, US made powders are difficult to find in Greece meaning that ECU, to date, has been unable to develop load data using common American shotshell powders. As of August of 2011, ECU was negotiating with a United States based importer for the purpose of making their slugs more readily available in the US and to develop load data using American powders. In the meantime, I was on my own.
My initial experiments with the slugs in April of 2010 resulted in a load powered by a large quantity of Blue Dot for a muzzle velocity of 1356 f/s. In retrospect, such a hot loading was really pushing my luck as far as safety was concerned and when I revisited the USS slug this fall, I was decidedly more cautious.
What I ended up doing was adapting data from a 3 inch, 1-3/8 ounce buckshot recipe that incorporated a gas seal. After charging the hull with a modest amount of Herco, I simply seated the gas seal and then the USS slug. There was just enough empty hull space left above the sabot to allow a roll crimp. Once I had loaded up a handful of the slugs, I was off to the range to put the slugs through a torture test.
Since USS slugs were engineered with large, tough (possibly angry) game in mind, I decided to test them in a way that went beyond simply firing them into a block of 10 percent gelatin. Instead, for the soft media portion of my test, I mixed the gelatin to a density of 30 percent, which was about as dense as I could make it and still get the crystals to dissolve. I was also curious about the bone breaking potential of the slugs. Lacking access to the shoulder bones of large animals, I settled for the closest analogue I could obtain – hardwood boards. The boards I obtained were cutoffs from a woodshop and thus of mixed species including oak, cherry, and mahogany. I reasoned that any projectile that could punch through more than an inch of such hardwood would also do a number on animal bone. 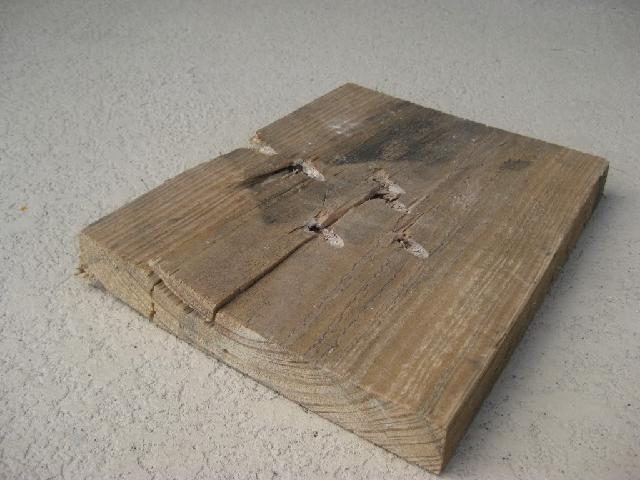 Since my tests are comparative rather than scientific, I made up two identical gel blocks and two identical board stacks to facilitate the test of a factory load, the results of which would be directly compared to the results of the USS slug test. In this case, the comparison round would be a 2-3/4 inch, 1-1/8 ounce Brenneke Classic Magnum. I decided on a Brenneke slugs due to the fact that they are composed of a particularly hard lead alloy and, like the brass USS slug, are designed with maximum penetration in mind.

At the range, my first take was to get a velocity reading on the two loads I was about to test. Generally, I refrain from shooting shotshell rounds over my chronograph as wads, gas seals, and sabots fly irregularly and with enough velocity to ruin a chronograph. During this outing, however, I was curious about the velocity of my handload, so I took the risk.
First, I got a reading on the Brenneke load. From the 18 inch barrel of my Benelli Nova, the projectile reached a velocity of 1,434 f/s at a distance of 12 feet from the muzzle. Next, I fired one of my USS loads over the chronograph and was disappointed by the paltry 1,136 f/s they reached.

With a 300 f/s difference between the two loads, I realized that my subsequent comparative tests of the rounds would be somewhat unfair. The USS slug isn’t even engineered to work properly unless it hits 1,200 f/s (the sabot petals won’t open up properly if velocity is too low). Since I was already at the range and all of my gear was set up, I decided to go ahead with the test anyway and see what happened.

In spite of low velocity, the USS slug easily penetrated the entire 12 3/4 inches of the gel block and then an additional 2 ½ inches into the ballistic wax I was using as a backer. I found the slug lodged sideways in the final wax block indicating that it yawed at some point during its journey through the material. I found no sabot petals in the gel, indicating that they broke away prior to impact in spite of the failure of the projectile to achieve 1,200 f/s minimum velocity. With the exception of a few scratches, the brass slug was completely unscathed. I considered the results impressive considering the barely sonic speed of the projectile.

The cavity left by the USS slug in 30 percent gel block and wax backer blocks. The point of entry is at the right of the block.

The Brenneke slug delivered observably more energy as was demonstrated by how far the gel block vaulted off its platform on impact. While the Brenneke slug created a slightly larger cavity in the gel, overall penetration fell just short of that produced by the USS. The Brenneke completely cleared the 12 ¾ inch gel block, but came to rest 1 ½ inches into the wax backer. The recovered projectile was deformed but largely intact, showing very little expansion.

The cavity left by the Brenneke slug in the gel block. The entry point is at the right of the frame. 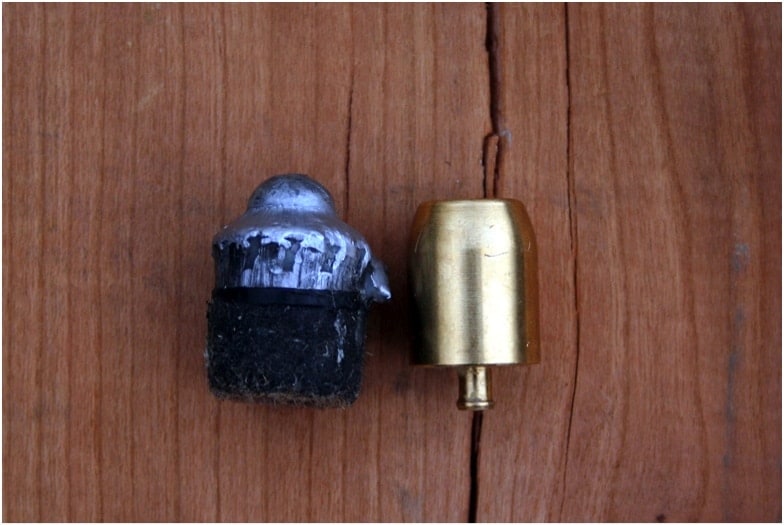 The Brenneke slug (left) and the USS slug after the soft media test. Add a new sabot and the USS could probably loaded and fired again.

The big surprise of the day came when I fired each round into the hardwood boards. The USS shattered three boards for 3 ¼ inches of penetration. Once again, the recovered slug showed no sign of trauma. Interestingly, the Brenneke slug out-penetrated the USS by a full inch. The recovered slug, while mangled, was still largely intact. I’m fairly confident that had I been able to add another 100 to 200 f/s to the impact velocity of the USS slug, it would have been the top performer against the stack of hardwood boards. 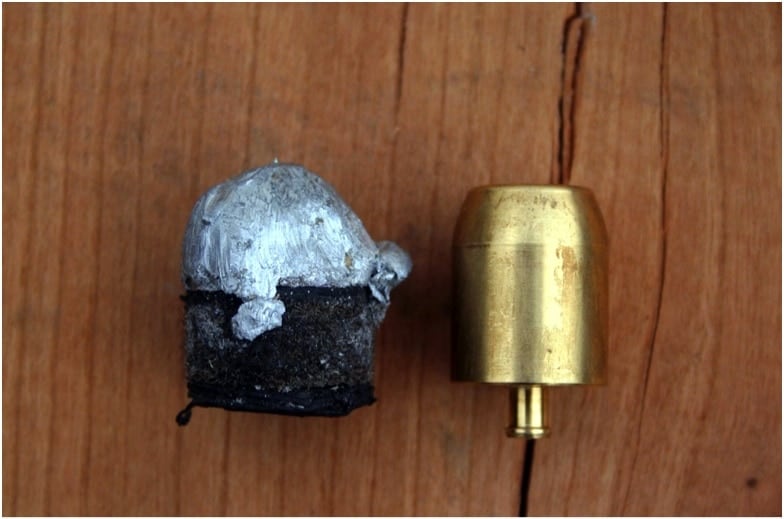 The Brenneke slug (left) and the USS slug after being fired into a stack of hardwood boards. The Brenekke is severely deformed but intact while the USS is completely unscathed.

It will be interesting to re-examine the capabilities of the USS slug when and if load data for American propellants becomes available enabling me to safely create higher velocity loads. Even at a tepid 1,136 f/s, the slug’s performance was impressive. I can’t wait to see what it can do when pushed to 1,400 f/s or faster. I am also eagerly awaiting an opportunity to try out the 700 grain and 970 grain versions of the USS slug. If, at some point, a science experiment goes horribly wrong and results in cloned tyrannosaurs running amok, I think I’ll be ready.