For competition shooters and long-range hunters alike, sometimes you can only tweak a gun so much; high-end glass, bedded, floated stocks, hand-loaded ammunition—there is a limit to how much you can push a conventional bullet out of a conventional firearm.  Enter Lazzeroni.

Starting in the early ’90s, John Lazzeroni of Tuscon, Arizona, started thinking about how to get bullets to go faster and fly farther than what anyone was trying for.  Realizing that pressure and friction were the real limiting factors for modern ammunition, he started working on a new kind of bullet. 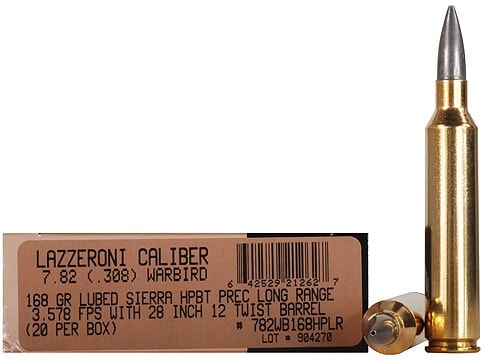 Aerodynamically speaking, Lazzeroni bullets aren’t game-changers.  But their construction is unlike anything we’ve seen.  Lazzeroni ammunition is factory-produced, undersized, then re-plated with a lubricating alloy that increases the diameter of the bullet to match the custom Lazzeroni-chambered rifles he makes.

This way, without significantly increasing the pressures in the chamber, Lazzeroni is able to make a 168-grain Sierra hollow-point boat-tail bullet leave the muzzle of a 24-inch rifle at over 3400 FPS.  Compared to .308 Winchester (the parent bullet) it’s about 800 FPS faster (2600 FPS) while only increasing the chamber pressure by 3000 PSI (from 62,000 to 65,000).

That’s 30 percent improvement in muzzle velocity, and not unique to Lazzeroni’s 7.82 Warbird.  The other calibers offer similar improvements in speed, and not just on paper.

“John was anxious for me to see firsthand that the velocities he claimed for his factory ammunition were accurate, and that they were achieved at pressures no higher than used by Weatherby, for example, 65,000 psi or roughly 55,000 CUP’s. That’s only about 1,000 more than used for most non-proprietary magnums. His 168-grain. Sierra HP load, for example, clocked 3,240 fps in the Savage’s 24-inch barrel at a recorded 65,100 psi. The 180-grain Sierra GameKing clocked 3,140 fps at 65,300 psi.

“Shortly after I returned home I received a copy of the pressure test results John had done at the H.P. White Laboratories in Street, Maryland, using the Conformal Piezoelectric Pressure System–the most accurate means of measuring pressure in firearms. The results show a 10-shot string of Lazzeroni Patriot factory ammo loaded with the 180-grain Sierra GameKing bullet as averaging 3,150 fps at 64,900 psi. This is virtually identical to the readings we got out in the desert.”

The rifles also don’t leave much wanting.  From the CNC-machined chrome-moly receivers, to the tuned Jewel triggers, to the Vais muzzle brakes, and to the graphite composite stocks, there is little to improve on them short of adding a stellar optic.

All Lazzeroni rifles are guaranteed to be one- or sub-MOA accurate out to 600 yards, which is just unheard of.  But what you might expect is that the combination of these rifles and this ammunition is not for anyone on a budget (unless your budget also includes airfare and lodging in Zambia)—prices for the rifles are between $5500-8000, and ammo between $3-7/round.  (Brass, bullets, and reloading equipment is also available.)