Defense Authorization Bill May Bring Battlefield Rules to US Soil

In an op-ed in the Huffington Post, Tom Parker the Policy Director for Terrorism, Counterterrorism and Human Rights at Amnesty International, USA, pointed out some of the alarmingly vague language in Section 1031 of the bill.

He wrote, “Section 1031 of the bill extends the Congressional Authorization for the Use of Military Force (AUMF) passed after the September 11th attacks to encompass any individual who has “substantially supported” Al Qaeda, the Taliban, or “associated forces.”

Well, and as Parker points out, there phrases like “substantially supported” and “associated forces” are incredibly vague.  What do they mean exactly?

He wrote, “The phrase ‘associated forces’ is so flexible that it can be used to encompass almost any militant Islamic group in existence from Indonesia to Nigeria. It might include political parties who share some of the militants’ aims but not their methods — like the Hizb ut Tahrir movement active in Western Europe and Australia.”

And as for the phrase “substantially supported” he wrote, “In the past the Department of Defense has described both writing an opinion piece for the Guardian, a globally respected British newspaper, and detainee suicide as terrorist acts. To date, this bar has not been set high.” 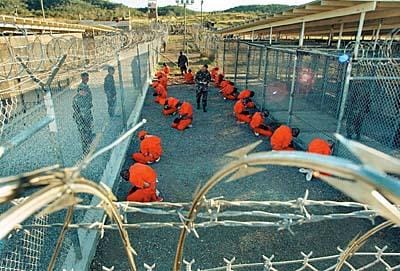 So, one can stand to reason that if this bill is approved, in its present form, whom is considered a terrorist and what is considered terrorism may be substantially broadened to include individuals on the periphery of wrongdoing.  In other words, the U.S. government can use military force against people who may only be tangential linked to terrorist activity.  And again, what constitutes “terrorism” or “substantial support” for terrorism is loosely defined.

For example, is occupied Wall Street a form of domestic terrorism?  What about a Tea Party Demonstration?  While these examples are a pretty liberal extrapolation of the language in the bill, one can see how there is room for gross misinterpretation if a corrupt administration is in power.

Another troubling aspect of the bill is, as Parker noted, Section 1033.  He wrote, “Even if an individual is exonerated of any wrongdoing, Section 1033 of the bill requires that they continue to be held in Gitmo if there is a confirmed case of detainee recidivism in that individual’s country of origin.”

Parker added, “Imagine if your personal freedom depended on the lawful behavior of every single one of your fellow 350 million U.S. citizens — we’d all be in jail.”

While we must continue to root out terrorism across the globe, we must do so in a way that doesn’t infringe on the civil liberties and basic human rights of innocent people.  Judging by the language in S. 1867, the stage is set for the abuse and maltreatment of innocents.

It was Thomas Paine who once said, “He that would make his own liberty secure must guard even his enemy from oppression; for if he violates this duty he establishes a precedent that will reach to himself.”  The Senate would be wise to reflect on this before they pass S. 1867.  As in the end, what goes around comes around.