Trijicon is world-famous for their rugged, military-tested and battle-proven optics.  One of their most recognizable optics is the ACOG, the Advanced Combat Optical Gunsight, with its long plume of a fiber-optic light collector.  The ACOG also uses a second light source, tritium gas; AGOGs don’t use any electrical power to light up the reticle, just solar and beta radiation.

The radioactivity-powered optics are also fixed four-power scopes, and used with both eyes open make quick work of targeting everywhere between the muzzle and a few hundred yards out.  There’s a reason you see ’em everywhere. 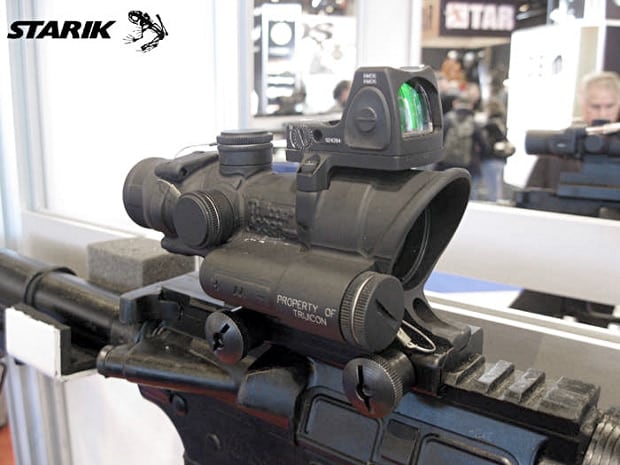 There are limits, however, to Trijicon’s reach.  Tritium gas is a restricted substance in lots of countries, places where operators would really dig getting their hands on ACOGs.

Tritium is ostensibly a by-product of heavy water manufacturing, and recombined with deuterium, can be made to go all mushroom-cloudy.  There are reasons it’s banned in places.  (Although you’d think if you can afford a few hundred thousand ACOGs for half a bomb component, something tells us your bomb-budget is not being spent wisely… but we digress.) 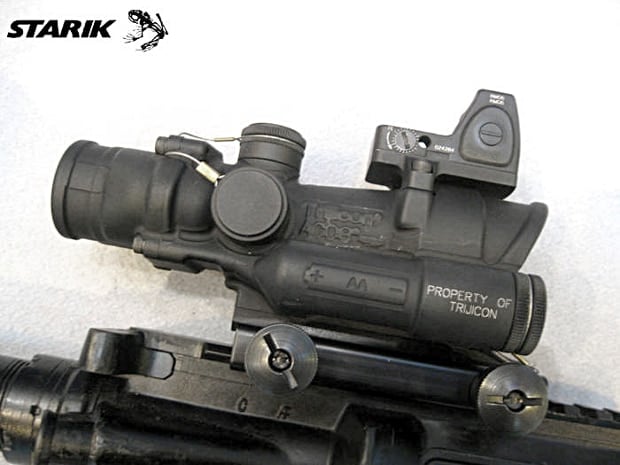 Trijicon’s gone and made an optic that’s battery-powered, using a conventional AA power plant.  It’s supposed to be good for 1200 hours of continuous operation, which isn’t the best but it isn’t the worst, and it’s of course built to the same rugged level people have come to expect for ACOGs.

What we don’t know is when will they become available, and at what price.  Because it’d be pretty cool if these conventional optics are wallet-friendly.  As much as we love us some ACOGs, the $1000-2000+ pricetag, depending on the model, is quite a burden for most people.  Even minus the fiber and the tritium, we’d be happy to see a a less expensive optic, and so would a lot of others.

We’ll keep our eyes peeled this SHOT Show, when all the hoopla takes off.