The Second Amendment Foundation doesn’t take a day off.  Whether it’s filing a lawsuit over an Omaha, NE, ordinance that restricts legal immigrants from registering handguns or suing California for damages over an unlawful arrest and to have the state’s definition of so-called “assault weapon’s” declared unconstitutionally vague, they’re always working to ensure the rights of law-abiding citizens are not infringed.

One of the more interesting cases they’ve filed in recent weeks is one concerning Stephen Dearth, a U.S. born citizen who now lives in Canada.  Dearth, who actually has a valid Utah CCW permit, wants to purchase a firearm in the U.S. for self-defense for when he visits friends and family, but cannot due to federal restrictions.   Here is his situation, as detailed in the lawsuit:

Plaintiff Stephen Dearth is fully qualified to obtain, own and possess firearms under federal law—but for his lack of residence in the United States. The law does not consider Dearth a danger with guns: he is permitted access to firearms for “sporting purposes,” a trust not provided felons, mental incompetents, or other categories of people disqualified from possessing weapons for readily obvious and compelling safety reasons. And were Dearth merely to relocate to the United States, he would face no federal firearms restrictions whatsoever.

However, because Dearth happens to make his home across the border in Canada, Dearth risks arrest and prosecution should he attempt to acquire a firearm in the United States for self-defense.

Indeed, Dearth cannot buy a gun within the United States, for any reason, by sole virtue of his foreign residence.

This obviously raises questions concerning Dearth’s Second Amendment rights.  The high court’s Heller (2008) and McDonald (2010) decisions have guaranteed an individual’s right to possess a firearm for traditionally lawful purposes in federal enclaves (Heller) and in the states (McDonald), such as self-defense within the home. 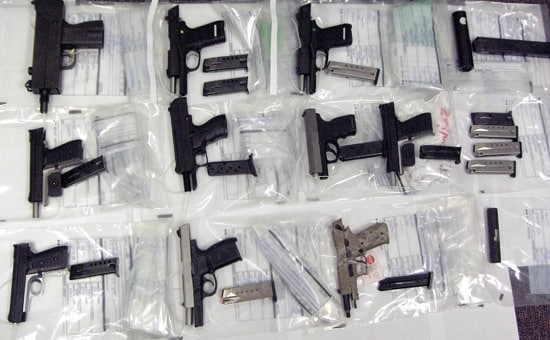 However, as Guns.com noted yesterday, current federal law is conspicuously ambiguous about whether the Second Amendment guarantees a right to bear arms in public for personal protection and/or self-defense.

Therefore, it seems that no home in the U.S. equals no explicit federal right to carry a firearm for self-defense.

And, looking at the actual form (Form 4473) an expatriate has to fill out to purchase a firearm in the U.S. would further substantiate that claim: no home equals no right to self-defense.

In 2006, when Dearth went to purchase a firearm from a dealer, he didn’t have a state of residence; he didn’t own or rent a home in the U.S, he couldn’t answer Question 13 on the form.  Therefore the dealer terminated his transaction.

Dearth’s case is interesting because it presses the court to examine (a) how the government currently infringes on the rights of U.S. citizens living abroad and (b) whether or not one’s Second Amendment rights extend beyond the home.

For more details on Dearth’s case, see below:

Title 18 U.S.C. § 922(b)(3), and 27 C.F.R. §§ 478.96, 478.99, bar a firearms dealer from selling firearms to individuals who do not reside within the state in which the dealer’s place of business is located. An exception to this prohibition allows a dealer to sell rifles and shotguns to residents of states where the dealer does not maintain a place of business, as long as the transaction would be legal “in both states,” that is, the purchaser’s state, and the dealer’s state. By operation of this section, otherwise qualified American citizens wishing to buy firearms cannot do so unless they maintain a residence within the United States. All firearms purchasers within the United States who do not possess a Federal Firearms License, meaning, virtually all ordinary civilian consumers of firearms, must complete “Form 4473, Firearms Transaction Record Part I – Over-The-Counter, OMB 1140-0020,” administered under Defendant’s authority, in order to purchase a firearm. 27 C.F.R. § 478.124. Question 13 on Form 4473 provides, “What is your State of residence (if any)? ____________” The failure to complete Form 4473, including Question 13, voids a firearms transaction.

2. The Challenged Laws’ Impact on Plaintiffs: Plaintiff Stephen Dearth is a natural born citizen of the United States and a resident of Canada. Separate Statement of Undisputed Material Facts (“SUF”) 1. He does not maintain a residence in the United States. SUF 2. Dearth is over the age of 21, is not under indictment, has never been convicted of a felony or misdemeanor crime of domestic violence, is not a fugitive from justice, is not an unlawful user of or addicted to any controlled substance, has not been adjudicated a mental defective or committed to a mental institution, has not been discharged from the Armed Forces under dishonorable conditions, has never renounced his citizenship, and has never been the subject of a restraining order relating to a child or an intimate partner. Dearth holds a valid Utah permit to publicly carry a handgun, which is recognized in numerous states.

Unaware of the federal restrictions on firearms acquisition by expatriated Americans, Dearth attempted to buy a firearm within the United States on or about January 28, 2006. However, he could not provide a response to Question 13 on Form 4473, and advised the dealer that he does not reside in any state. On account of Dearth’s foreign residence and inability to answer Question 13, the transaction was terminated. Dearth subsequently spoke with an official at the Federal Bureau of Investigations, who confirmed that Dearth could not adequately complete Form 4473, and could not purchase a firearm on account of his lack of domestic residence. Dearth subsequently sought to purchase a firearm within the United States.

Dearth truthfully advised the seller that he did not reside in any state, and on account of that fact, the transaction could not proceed.

Dearth reasonably fears arrest, prosecution, incarceration and/or fine were he to provide false state residence information on a Form 4473 in order to purchase firearms, and cannot purchase firearms at retail if he truthfully declines to list a state of residence on Form 4473. The enforcement of the federal restrictions on firearms acquisition by expatriated Americans is presently interfering with Dearth’s efforts to acquire firearms for self-defense.