As mentioned in a previous Guns.com article, the Supreme Court has had two opportunities this fall/early winter to hear cases that would allow them to clarify whether one’s Second Amendment rights extend beyond the home.

Now, the question of whether the Second Amendment guarantees a right to bear arms in public for personal protection and/or self-defense will remain unanswered for the foreseeable future.

To give one a quick recap of what the Second Amendment means in the eyes of the court today, there was the Heller decision in 2008, which overturned the D.C. handgun ban and declared that individuals have a fundamental right to keep and bear arms for self-protection within their homes.  And in 2010, there was the inevitable follow-up to the Heller decision, the McDonald v. Chicago decision, which extended the Heller ruling to all the states (not just federal enclaves).

So, we now know that we have a fundamental right to keep and bear arms (in particular handguns) within our homes, we just don’t know whether that right extends to public spaces (it’s quite obvious to most of us that it does, but our Judicial system has yet to render an explicit verdict). 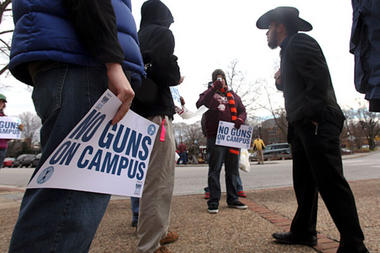 Like Williams v. Maryland, Masciandaro v. US would have pressed the court to answer that question and render a verdict.

The case arose after Sean Masciandaro was arrested in June 2008 for carrying a loaded handgun in his car while on-site at a national park.  A police officer found him sleeping in his car and asked if he had any weapons on him. Masciandaro disclosed he had a loaded gun.

He was convicted of violating a federal regulation, and fined $150.

Masciandro appealed the ruling and petitioned to have his case heard before the high court.

While his appeal was pending, the government actually changed its regulation with respect to carrying firearms on federal land; it’s now legal provided that it complies with state law.

Nevertheless, a panel of the Fourth US Circuit Court of Appeals affirmed Masciandaro’s conviction, ruling that he had violated existing law at the time of his offense.

The Judges on the appeals court also declined to render a decision on the heart of the matter, whether Masciandaro had a right to carry a loaded firearm for self-defense.  They sheepishly deflected that responsible to the Supreme Court.
“We think it prudent to await direction from the court itself,” Circuit Judge J. Harvie Wilkinson wrote.

“There may or may not be a Second Amendment right in some places beyond the home, but we have no idea what those places are, what the criteria for selecting them should be, what sliding scales of scrutiny might apply to them,” he said. “The whole matter strikes us as a vast terra incognita that courts should enter only upon necessity and only then by small degree.”

Judge Wilkinson also added, “This is serious business. We do not wish to be even minutely responsible for some unspeakably tragic act of mayhem because in the peace of our judicial chambers we miscalculated as to Second Amendment rights.”

“It is not far-fetched to think the Heller court wished to leave open the possibility that such a danger would rise exponentially as one moved the right from the home to the public square” Judge Wilkinson concluded.

The Second Amendment Foundation weighed in on the matter and filed a friend of the court brief challenging Judge Wilkinson’s comments. “No court should wish to feel responsible for a violent crime that could have been averted or disrupted had the court not ‘miscalculated as to Second Amendment rights’ and left the victim without arms for her defense,” Alan Gura wrote in a brief urging the Supreme Court to hear the case.

But on the other side of issue, US Solicitor General Donald Verrilli urged the high court not to take up the case.  He argued in a brief, and on behalf of the Obama Administration that, “The decision of the court of appeals does not conflict with any decision of this court, any federal court of appeals, or any state court of last resort,”

In the end though, and for whatever reason, the Supreme Court backed away from what was another perfect opportunity to set the record straight.

As Masciandaro’s lawyer, Assistant Federal Public Defender Rachel Martin, wrote in her brief, “This case gives the court the opportunity to expressly hold what it already decided in Heller: the right to keep and bear arms includes the right for a law-abiding citizen to do so in self-defense, and not just in the home.”

Sooner or later a decision on this must be made.  One would think with 4.75 conservative Justices, now would be the time.