A few months back, I began looking for a good full-sized semiautomatic pistol. I wanted something I could carry on my hip when I wander around out in the woods. I usually carry a .357 Smith & Wesson Model 60, but I was looking for a change.

I wanted something big, but I didn’t really know what that meant. Bigger than my three-inch S&W, but a larger cartridge? More muzzle velocity? Longer barrel?

I wanted a gun that was reliable and accurate. I wanted it to shoot ammunition that was readily available and highly effective. I wanted impressive terminal ballistics – serious penetration, rapid expansion, and the potential for hydrostatic shock. That meant I had to guess at transitional ballistics. Velocity. How fast is the bullet going after it has left the business end of the barrel?

I turned to a friend who is involved with law enforcement and asked him about his experience with 1911s. He loves them. I love them, but I had concerns about the low muzzle velocity of the .45 ACP. I asked him if he ever worried about that, as he carries a 1911. “Yeah,” he said, “but if you ever get shot with a .45, you’re gonna feel it.”

Sounds good to me. And I even know which brand of ammunition I can expect to deliver these results.

How do I know these things?

Jim Downey, Jim Kasper, Steve Meyer and Keith Kimball are the wizards behind Ballistics by the Inch (BBTI). They’ve just launched a revamped and updated website. I would like to point out the obvious nepotistic nature of this otherwise genuine endorsement. Jim Downey is a Guns.com writer and one of the masterminds behind this insane project.

The idea is simple. The crew at BBTI wanted to know how barrel length affected the velocity of the bullet as it leaves the gun. Why guess about the numbers when it can be tested?

So they devised an experiment. They had a gunsmith build barrels in various calibers that would fit onto a Thompson Contender # 1842 frame. They started at 16-inch barrel lengths and worked their way through different brands of ammunition. After they had consistent results with all of the ammunition of a certain caliber, the team chopped an inch off the barrel, dressed the end and shot the next round.

In this fashion, they’ve logged data for barrel lengths from 18 inches down to two inches at one-inch intervals.

For 22 different calibers and cartridges.

That’s a lot of lead. And they test “real world guns” and cylinder gap – it just keeps getting better at BBTI.

But this isn’t Science

And it isn’t meant to be. These results establish some pretty reliable numbers, but they are meant to be “indicative,” as the BBTI site reminds everyone – not empirical. This information is a close as many of us will ever come to being able to argue articulately about the merits or detractions of a given caliber or cartridge at a specific barrel length without testing the gun ourselves.

I had a chance to talk with Jim about the website and some of BBTI’s motivations.

“How are folks using these numbers?”

“Well, firearms enthusiasts being firearms enthusiasts, they’ll argue over just about anything. So I have seen our data used in all kinds of ways, including in trying to claim that it is definitive and therefore one brand of ammo or firearm is ‘superior’ to another. If you look at the current site, you’ll see that for the revamp we have emphasized the indicative nature of the data to help people understand the difference.”

“What is the difference?”

“In scientific terms, I guess you’d call this a ‘preliminary study’ meant to look at whether something was going on which might warrant full investigation. There’s a pretty good suggestion that something is, but it would need a comprehensive effort to establish it conclusively.

And this is one of the things I respect so much. The crew at BBTI understands that this these data sets, however indicative of certain trends, point the way for a much larger project.

“We’ve just tried to be honest about the whole project and the results, both in terms of the limitations and the problems. Frankly, we’ve generally been more scrupulous than most anyone cares – harder on ourselves than almost anyone else is on us. We recognize that the sample size is much too small, but this is a free, volunteer effort designed to provide some sense of what is happening.”

“Some time back I was fascinated to see that people were saying things on some of the forums along the lines of: ‘Well, we know that the XX-brand ammo performed just as BBTI tested, so even if they haven’t tested XX-brand’s 9mm cartridge, we can give the manufacturer’s claims a fair amount of credibility.’ That told me that we had crossed some kind of threshold, and become ‘the standard’ by which other claims were measured.”

And the ammunition manufacturers?

“I’ve been told by people working in the ammunition industry that they have found our data to be of great interest – not that they weren’t testing their own and their competition’s products, but having the information out there from an independent source has helped to raise consumer awareness. I probably couldn’t prove it in a court of law, but I’m pretty certain that the different manufacturers are more, um, forthright about the actual performance of their ammunition due to our project.”

I have to hand it to BBTI. Anyone who can help to keep a business, um, forthright…

Let’s say, hypothetically, I’m currently in love with the Beretta Nano – a 9mm semi-auto with a 3.07” barrel. 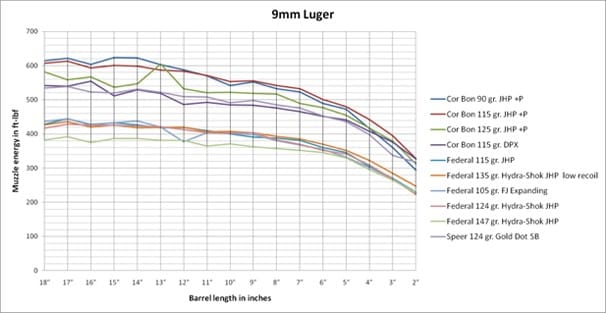 As much as I like what the Nano does, and how Beretta has built this little gem, I also like the new Colt Mustang, which is a .380 ACP. With its 2.75-inch barrel, the Mustang loses some of the .380 ACP’s potential. 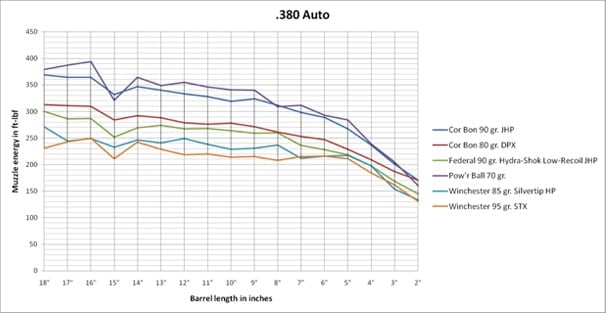 The numbers are much closer than I thought they would be, but the longer barrel on the Nano, when combined with the increase in bullet weight and power from the 9mm Luger cartridge, really eliminates the argument. If everything else were equal, the choice would be easy.

As it is, I’m still flummoxed.

I’m going to stick my neck out here and say that the biggest, fastest, hardest hitting bullet may not be the best one for the job. There are arguments to be made for the number of rounds available, for shot placement, and for manageable recoil.

But now I have some numbers to fill in some of the gaps, and the numbers are leaning toward the Nano.

Still—How much did this insane project cost?

As I wade through page after page of numbers, I can’t help but wonder about what testing like this might set me back, so I asked Jim to guess at the expense.

“Out-of-pocket, something on the order of $45 to 50k. But that doesn’t include literally thousands of man-hours of labor.”

“But the amount of work involved and the scope of the whole thing keeps growing, so we decided to start accepting donations (which people have been offering for some time) to offset our expenses and provide funds for future tests. We’ve kicked around establishing a LLC for these purposes/reasons, but haven’t taken that step yet.”

Anyone interested in chipping in can do so at the website – though it isn’t a charitable donation, all of the funds will help drive BBTI forward.

“This year we’ve tested as much ammo/guns as we had tested altogether previously, and had to come up with the new protocols and procedures for the Cylinder Gap tests, then get all of that data compiled and completely revamp the website.

“And I know from experience that the next few months following the ‘relaunch’ will involve a lot of email, and articles, and questions, and probably some slight corrections to problems with the site, et cetera.

“But for further down the line … there’s always new ammo and new guns coming out. There are still some primarily handgun cartridges/calibers out there we haven’t tested. And now that we’ve tried one rifle cartridge, and have some sense of what is involved with that, that may be an area of interest. And I might be curious whether there is a significant difference in Cylinder Gap loss for another major caliber revolver – You get the idea.”

I’ve got to admit that I’m just a bit jealous. I wish my high school science project had been half as fun as something like this.

And I have a suggestion. I want some data from the Governor and the Judge. My hypothesis is that these short barreled beasts are going to turn in some ridiculously low numbers.

But I’m not about to test my hypothesis. I’ll leave that to the good folks at BBTI.