Picking the Best Holster for Your Handgun

Right after selecting a handgun, one of the most important things to consider is the kind of holster that you will be using. Picking a holster with the number of companies and styles out there can be pretty baffling, and you need to consider what specific activity you are going to be using it for before just buying anything off of the rack. Here’s a little tutorial:

For handgun hunters who are going to be sitting down for a long period of time, the standard hip holster is probably not going to be the most comfortable if you have a long barreled revolver or pistol, especially if it’s wearing a scope. A shoulder holster here is pretty much a given but not always. I found out that I never cared for a shoulder holster as they tended to rub against my neck and back as I have pretty broad shoulders. I have tried several different types and manufacturers, but so far no luck. I instead found that I can comfortably carry and wear a long barreled handgun with a crossdraw style holster.

Your holster choices really expand when you’re looking to carry a concealed handgun. Paddle holsters, inside the waistband, hip holsters, cross draw, shoulder holsters are all a good choice for how you want to carry your piece on the go. Don’t be surprised if you end up with more than a few holsters for one gun because you might find that it doesn’t wear quite the way you want it to. 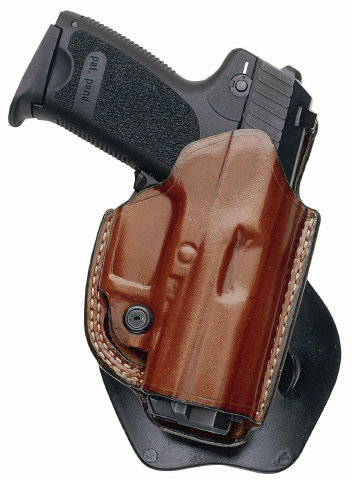 So what if you just want a holster to wear around on a trail but don’t want to spend a lot of money? I can’t think of a gun shop that doesn’t have a few holsters lying around in a bin or a box somewhere gathering dust. More often than not there will be old duty style holsters that hang a bit low on your hip but they cover a lot of the gun, are pretty tough and hold up better than some of the cheaper nylon holsters. I have purchased holsters for only a few dollars that have lasted me years in all weather conditions. 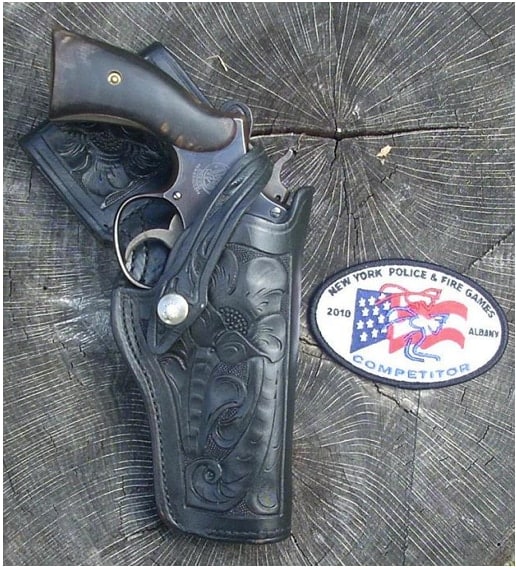 A debate that often comes up is leather holsters versus polymer and nylon. A lot of folks will tell you that if your holster is made from leather you will get a lot of wear on your gun and ruin your finish, especially in a blued gun. The problem is that some people will leave their handguns in their holsters all the time and this will draw in moisture, which rusts and pits the gun’s finish.

The other issue is that some people will buy a leather holster that is universal and doesn’t quite match up to the gun allowing it to move ever so slightly, causing wear on the barrel and other parts. I have had the same leather holsters for years carrying only one revolver in it all year round and there is no noticeable wear on its blued finish. I’ve experienced some good with a few polymer holsters, too. Still, for a purist like me, there is something about leather that the newer materials just can’t duplicate.

You may be wondering how much you should spend on a new holster (not a used holster), and despite the fact that some seem to cost an arm and a leg, there are some newer makers that have come along that put out some very nice products. One of my favorites is SimplyRugged, which makes some excellent holsters for nearly every brand of revolver and can be bought for less than $75. I have two of their holsters that I bought more than five years ago and they are still holding up just like they did on day one.

For those who like polymer holsters, a good company that is coming up quick is Talon Tactical. While they don’t offer as many selections as some of the bigger makers that have been around for years, their stuff is very well made and it won’t break the bank.

Selecting a handgun is a big choice, and so is picking the holster that you are going to be carrying it around in. There is some trial and error involved in getting the one that fits the best for you, but when you find the one you like you’ll have a match made in heaven.