Every once in a while, a gun comes along that’s so impractical, so outrageous, and totally unnecessary that… we can’t help but want to play with it.  This one-off nameless rifle that fires these .700 WTF cartridges is exactly that.  Oh, but the good times we’d have with you, WTF. 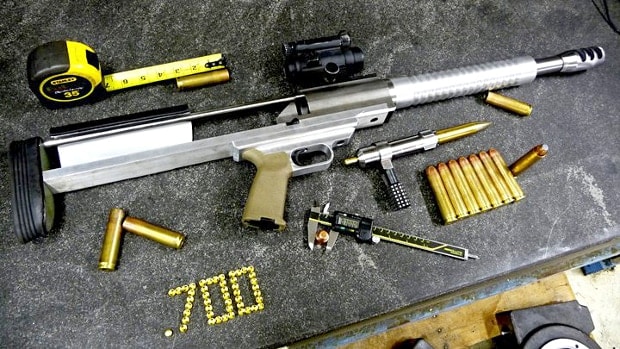 Let’s start with the cartridge.  The .700 WTF is a hand-loaded wildcat made by taking a .50 BMG case, fire-forming it to the chamber, and trimming it down to a clean three inches.  Then it’s necked and sized to fit a .70 caliber cast lead bullet (or boolit, if you will) that weighs in at 1132 grains, or 2.59 ounces, or more than two-and-a-half 12 gauge slugs.

These guys (this guy?) built the whole rifle from scratch, save for the barrel, which was made to-order, and the furniture bits, which are a Magpul MOE grip and a LimbSaver buttpad, which looks wafer-thin on this puppy.  We’re guessing they also didn’t fabricate the Aimpoint. The rifle that shoots the .700 WTF is a single-shot bolt-action firearm, and by using a shell-holder, which requires that the bolt be removed to load the rifle, makes it count as a “sporting rifle” for ATF purposes, and not a “destructive device”.  The quarter-inch steel plate they shoot might argue otherwise…

And so might the guys who practically fall over after taking a shot.  It’s all about proper stance, ladies and gentlemen.

You have to love how the steel plate essentially became a steel jacket.  And that’s just with regular round-nose lead bullets and a reduced powder charge; they didn’t even harden them or load the cases to their full capacity.  We want to see this rifle taken to task.  Shooting a bit of wood just isn’t going to sate our need to see this gun and its ammo go through the wringer.  Pumpkins are a little out of season, and perhaps a little too… small.  Anyone have any spare tanks?  We’ll settle for a Humvee.

We don’t really care that this is one of the silliest and most dangerous rifles we’ve ever seen.  We would do bad things to spend some time at the range with it and a bandolier of .700 WTF.  Or maybe just a couple of rounds.  We’re not sure how many times a mortal can fire that rifle before having to go home and take a nap.