When it comes to self-defense within the home, Vermont is not like Texas or Florida.  It does not have a ‘Stand Your Ground’ Law.  In fact, in Vermont the law is relatively subjective on when one is justified in using deadly force to defend himself/herself.  A recent burglary in Rutland Town served as a reminder as to how wishy-washy self-defense laws are in the Green Mountain State.

A few weeks ago Particia Billings, 49, fired three rounds from a handgun at a man attempting to enter her home.  According to reports, the intruder fled her property leaving behind no evidence that any of the bullets hit their target.

State police Lt. Charles Cacciatore said that, for the time being, no charges should be filed against Billings for her actions in defending her property.

However, Lt. Cacciatore stated that if the intruder is found and arrested, he could lodge a complaint against Billings, in which case she could be investigated and potentially prosecuted for her attempted use of deadly force.

In Vermont, as in many other left-leaning states, one has to demonstrate or prove that he/she had “reasonable belief” that he/she was in jeopardy of being seriously harmed (or killed) to use deadly force.  Moreover, Vermont law defines justifiable homicides in part as killings that take place “in the suppression of a person attempting to commit murder … burglary or robbery with force or violence.”  That qualifier of “with force or violence” adds an additional headache when it comes to exonerating someone who has had to use deadly force in self-defense.

Now, compared with Florida’s ‘Stand Your Ground’ law, which states with respect to home invasion, “Deadly force is OK if someone breaks into your home, car or boat,” one will notice a discernable difference.  That is, in Florida “reasonable belief” or the threat of “imminent danger” does not have to be established to justify the use of deadly force because “there is an absolute presumption that the person attempting the entry was doing so with the intent to commit a violent act (i.e. “forcible felony”), and that the defender is presumed to be acting in reasonable fear of death or great bodily harm to himself or herself. In other words – no arrest or prosecution is technically “legal” if someone without a right of entry or ownership is trying to break in, and you shoot them,” according to Florida Firearms.com.

However, in Vermont, there’s no such presumption, as Martinez Campbell, an associate professor at Vermont Law School, explained to the Rutland Herald, “It [reasonable belief] varies according to the situation,” she said. “A person’s fear of bodily harm or death is a very subjective point of view. What’s ‘reasonable’ has to be decided through an analysis of what a reasonable person would have thought.” 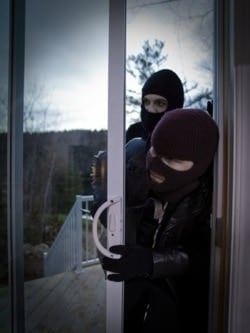 One should give pause and point out the obvious, is it not reasonable to believe or presume, as the state of Florida does, that a home intruder is there to harm you in some form or fashion?  Is that an unreasonable presumption?

“Just because someone is in your house doesn’t mean you’re in jeopardy,” Lt. Cacciatore told the Rutland Herald. “The question that is key in these things is ‘what is the immediacy of the threat?’”

Lt. Cacciatore also told the Herald that he has conducted self-defense discussions in classroom settings, says he has often asked students to measure the threat in inches. Is a man brandishing a knife 5 feet away from your position a threat? What about if the same person is 10 feet away? Or what if there is a locked door between you and your assailant?

“It comes down to when are you in immediate danger of harm to yourself and when does that immediacy no longer exist,” he said. “And if you can articulate how afraid you are in a given situation then you could be in jeopardy.”

Was Billings in imminent danger?  Did she have good reason to believe that the would-be burglar was going to do her harm?  Was the man using force or violence when he was entering her home?  Was she justified in discharging her firearm?

It should be noted that Billings house was burglarized four months earlier.