If you’re an arms smuggler, Syria is the place to be.  Well, technically speaking, on the outskirts of the porous Syrian border.  Presumably, one doesn’t want to be caught in the actual country that’s having bouts of civil unrest.

According to Abu Wael, a 63-year-old arms smuggler based in Lebanon’s Bekaa valley, business was booming during the first six months of the Syrian protests.

Abu Wael told Reuters that during that time period he sold 2,000 AKs and M16 rifles, his highest turnover during his long tenure as an underground arms dealer. 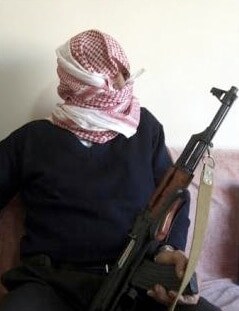 “I buy weapons from Lebanese people and sell them to traders who in turn pass them on to Syrian merchants,” Abu Wael, who declined to give his full name and spoke to Reuters with his face concealed by an Arab keffiyeh headdress which is part of Abu Wael’s arms smuggling code of conduct: keep the face covered, never speak by telephone, and wear the garb of a Bekaa farmer to avoid attracting attention.

“There is an organized network between Lebanon and Syria dealing with the purchase and sale of weapons of various kinds, especially rifles,” he added.

The destination of these smuggled arms is the hands of anti-Assad fighters, who call themselves the Free Syrian Army.  They’ve been launching violent attacks in an effort to oust the autocratic ruler, President Bashar al-Assad.

For the past several weeks, diplomats and non-violent protestors have been attempting to downplay the violence and the growing demand for arms.

“I think there is an effort by activists helping the defectors to cover up the fact they are smuggling weapons,” one Assad opponent from the central city of Homs told Reuters.

“They want to keep the media focused on the peaceful revolution happening, not on the armed rebels fighting the army. They are definitely smuggling weapons, I’m sure of it.”

The facts support his assessment.

The United Nations has reported more than 4,000 people have been killed since the uprising began in March.

And today, the New York Times reported that November was the deadliest month of the uprising, with at least 950 people killed in gun battles, raids and other violence, according to activist groups.

Violence is on the rise.  So much so that top United Nations human rights officials characterized the clash as a civil war and called for international intervention to protect civilians.

It looks like Christmas is coming early for guns smugglers.