Why We Should Practice Beyond Prone, Kneeling and Seated for Long Distance Shooting

As a former military sniper, I was trained to engage a target primarily from the three shooting positions—prone, kneeling and sitting. But in the course of my real life combat experiences, I’ve found there’s a need to master other, often less comfortable positions, even for long distance shooters. Really it all depends on the situation, and for a civilian marksmen, being a little familiar with many positions is a lot “safer” than being tethered to a few.

By courtesy of military brass or Olympic coaches, we understand that the best shooting positions accommodate the shooters’ body, adapt to the terrain the weapon will be fired on up to the target area and (of course) support the rifle in a fashion that makes it more controllable and, therefore, more accurate.

The prone position offers great steadiness of aim, and its obvious concealment advantages can’t ever be discounted. This is my favorite position for these reasons as it is for many long distance shooters. The kneeling position creates a steady base for the arms, and thus also for the rifle, but it isn’t a position that can be maintained for any great length of time before muscular tremors set in. It’s also, as you may know or have guessed, murder on the knees (especially older knees). The sitting position provides the steadfastness of the back and the bracing of the elbows on the knees but, again, it won’t be awfully long before muscle fatigue sets in (usually starting with the forearms) no matter how great of shape we’re in.

The point is that all of these shooting tactics present weaknesses and depending on the circumstances one finds oneself in, there are countless variations on these positions for the sniper or any long-distance shooter to combat them. Shooting with support from your off-side may be the only way to make the shot after your shooting side gives out while glassing a target (be it a deer or a terrorist) for 10-minutes without a shot opportunity. One other thing that should be obvious is this—quick, reactive movements are extremely limited in all three of these positions. This is not to say quick movement is of extreme importance to the sniper positioned a mile away, but a degree of mobility plus the potential to set up and take, say, a moving target faster are all bonuses for military or civilian shooters.

For example, the standing position is one that the sniper just probably isn’t schooled enough in, but one that, every once in awhile, presents itself as the only option to make a really quick shot. Though it may seem impractical if not impossible for some with .50 caliber Barretts, it’s totally manageable (check out video for recoil) with the venerable .338 Lapua Magnum—the reigning king of sniper rounds.

Over the years, snipers have gotten very creative with unusual shooting positioning, sometimes with spectacular (and as you’ll see not so spectacular) results.

When I was a young guy of about nine and growing up in England I read a story about a World War II Japanese sniper on some island somewhere out in the Pacific who would hide way up in the branches of a tree, and when a target happened along he would hang upside down for a few seconds, bent legs over a branch. Dangling upside-down like a monkey, he would make accurate long-distance shots and then quickly pull himself back up into hiding to wait for the next target of opportunity. 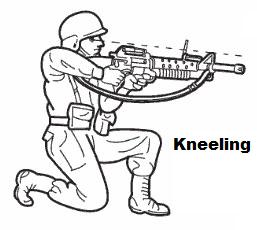 As luck would have it, my dad had just bought me my first .22 caliber rifle and I thought if that Japanese sniper could hang upside down and make shots like that, so could I. So I lined up a bunch of old tin cans about 50 or 60 yards out from our enormous old oak tree in the back yard, and began the climb up to the first set of branches. It felt like I was a good 30 feet above the ground, which sloped away from the base of that tree at a fairly steep angle. At the ripe old age of nine, I thought I was safe enough.

With rifle in hand, I swung upside down while trying to get a bead on the first can. I remember screaming, “Oh, shit!” about 1.2 seconds before hitting the ground on my head and rolling the rest of the way down the little hill. Aside from the dangers of high places, that incident taught me a pretty good shooting lesson: I had a whole lot more to learn. More than a half century later, I am still on that learning curve. 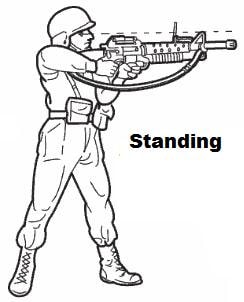 When it comes to these more obscure or uncomfortable positions, the key is to practice, practice and then practice some more. Contrary to popular belief, a sniper may not necessarily be a natural marksman, or marksperson (as an awful lot of unbelievably fantastic long-range shooting is being done by a growing number of female shooters nowadays), but rather a person with certain intrinsic skills honed by a regimen of intensive training and practice.

Yes, our history books abound with stories about those great shooters, and thank God we’ll always have folks like Master Gunnery Sergeant Carlos Hathcock, but even he had to do some fine-tuning from his early days of knocking squirrels out of trees from 100 meters away. In most cases, it comes down to training, pretty much on a 24/7 basis and that’s where you should begin: train as much as you can because this will show you the more unusual shooting positions you will need to use to adapt to long distance shooting scenarios.

When it comes to competition shooting, thanks in large part to the military heritage of the sport, we still go back to those three primary positions of sitting, kneeling and prone. But standing is now included as well as the bench rest for all of us arthritic types (I’m only joking folks. I know a bunch of great young long-distance shooters who have taken the bench rest sport to new heights). Hey, maybe some day they’ll turn hanging upside down out of tree branches into an Olympics event!