This is what happens when Kel-Tec engies get bored.  A little company called Twisted Industries has been quietly toiling away making .22 Long Rifle conversion kits for Kel-Tec’s popular single-stack pocket 9mm.  They’re adding another kit soon for the P-11 fans out there. 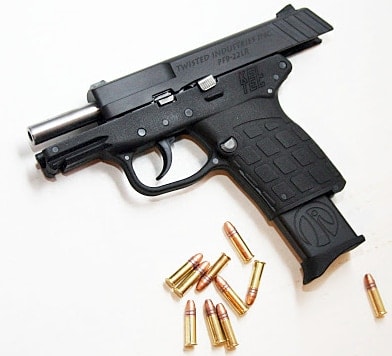 The PF-9 is a sweet little pea shooter, an ultra-lightweight pistol that’s extremely easy to carry and conceal, and really affordable.  Right now you can find PF-9s for $250 or less.

The problem is that they’re so lightweight that they stop being fun to shoot after a while.  The trigger on a PF-9 is double-action only, smooth, light, but long, and that means if you want to be accurate with one, you have to train with it; which is a catch-22 when it comes to sparing your hands.

A .22 caliber conversion kit is just what the plinker ordered, and makes the PF-9 a whole lot more appealing.  Twisted Industries conversion kit includes a machined aluminum, CerKoted slide in black, olive drab, or coyote tan to match your Kel-Tec.  The barrel is stainless steel and the 10-round magazine machined aluminum.  The installed sights are the same as on the PF-9.  All said and done, it’ll set you back $200.

Extra mags are on the high side at $35, but really, when you take the whole thing into account, you can get a PF-9, a conversion kit, and an extra magazine (or two if you get a good deal on the gun) for under $500.

But having a great EDC gun in 9mm and a .22 conversion kit is just half the picture.  With the aluminum slide, a PF9-22 weighs 12.2 ounces.  Loaded.  That’s less than a can of soda; it weighs 9.4 ounces dry—dangerously close to derringer territory.  We have to say that this little combo might be one of the more impressive kit guns out there; camping, hiking, fishing—if you want to enjoy a .22 plinker in the great outdoors, the PF9-22 might very well be the lightest magazine-fed .22 on the market (and with a 3.1-inch barrel, no less).

They’ve actually been in production for a little while now, and there’s little or nothing negative about them.  Yeah, they like hotter ammo, especially in that break-in period.  But after 500 cycles or so, they get a lot less picky.  This isn’t anything special about a lot of .22 semi-automatic handguns.

Sure, all said and done, it’s more expensive than say, a Beretta Bobcat or Taurus PT22.  But then neither of those can be made to shoot 9mm… 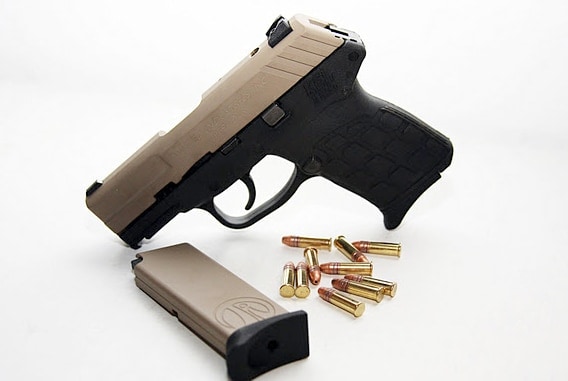 And if you’re quick, they’re accepting pre-orders for beta testers on their P11-22 kits.  $200 gets you a chance to test-drive one and get involved in the development process.