I see a lot of defensive handgun drills out there listed in various forums and articles that seem to give the impression that the shooter can either afford to buy dozens of boxes of ammunition or they have Billy Bob and his cousin sitting in a workshop somewhere on a progressive press, reloading thousands of spent casings.

Don’t get me wrong I really believe when it comes to practice you should get much as possible, but there are smarter ways to do this that won’t cost you a fortune.

You see, learning to shoot, in any form, is all about repetition, particularly when it comes to mastering sight alignment and trigger pull. Building muscle memory is fairly simple and, contrary to what many instructors will tell you, it does not require an all day outing at the range.  It does however require practice and below are six cheap and simple drills that can get your defensive handgun skills up but, when the day is done, will cost you little more than a box of ammunition.

The first target will be at a distance of 7 yards. This target is going to be a silhouette like the ones officers use to qualify with for law enforcement exams or (even better and cheaper) a thick paper or cardboard cut out in the simple outline of a person. Leave the target blank with no bull’s eyes or scoring rings to make it more realistic.

Let’s head to the 7-yard line and get started. 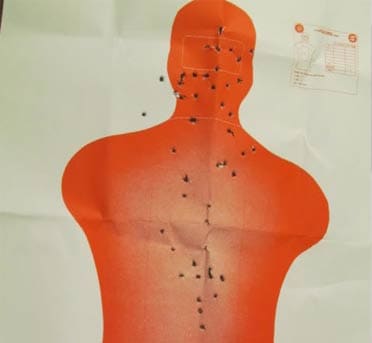 Drill #1: Two Shots on One Target

This drill is going to be performed with gun in hand, aimed at the target, but with your finger off of the trigger. Whether you wish to use one hand or two to steady the gun is your choice. Start off very slowly and aim for the center mass of the target. So what is the center mass?

Your aiming point is going to be the area of the sternum, right between the nipples. If your aim is not spot on you still end up hitting a lung or other vital area. Just like hunters have to know the vital area of the game they are pursuing, it is your responsibility to know at least the basics of human anatomy.

This is not a drill for speed; you are working on those crucial sight alignment and trigger control skills. Perform this drill five times before moving on to the next exercise.

Drill #2: One shot on Two Targets

For this drill you will need to set up an additional target beside the first no closer to it than a foot or so. Again you are going to have your handgun aimed at the target, finger off of the trigger. You can shoot either the target, the one on the left or the target on the right, to shoot first—it doesn’t matter but don’t always shoot the same one first if you end up using this drill often.

Fire one shot at the center mass of each target. Again, perform this drill five times. Do this slowly at first (remember, you are learning repetition) but speed can come later; right now you want accuracy and consistency. 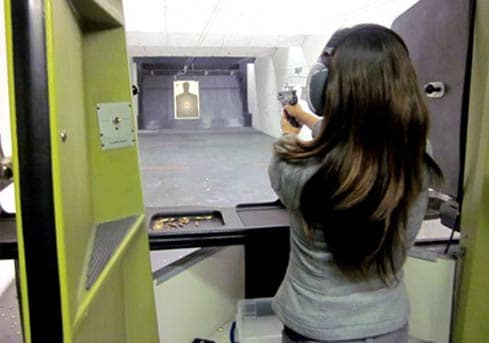 Drill #3: Fire on One Target, Reload and Then Fire Again

Start with the gun aimed on target, finger off of the trigger. Repeat this drill five times.

Drill #4: One Shot on One Target from the Low Ready Position 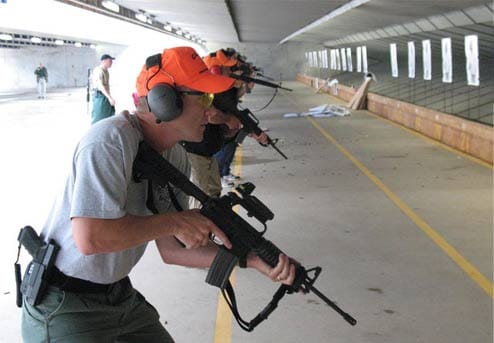 Drill #5: Draw From Concealment and Fire One Shot on One Target

This is a drill where I cannot advise you enough to start off slow. Again your body and mind are learning muscle memory through repetition and it is important to get all the steps right, especially drawing the gun. You have to crawl before you can walk.

With this drill you will start off with the gun in your holster with any straps or restraints fastened. To make this drill even more realistic, wear a coat or a jacket that you would normally have on if you were out in public during the cooler months. Start the drill with both of your arms down at your sides exactly as you would have them normally. Draw the gun from its holster and fire one shot, center mass. Perform the drill five times, re-holstering the gun between each drill and securing any straps or restraints.

Drill #6: Drawing From Concealment for Three Shots on Three Separate Targets, One Shot for Each Target

Like the previous drill, you are going to be starting this exercise with the gun secured in its holster. You will need three targets for this drill, all side by side no closer than a foot apart from one another, all on the 7 yard line. You are going to draw from concealment, fire one shot on each target for a total of three shots. Whether you shoot from left to right or the other way around is up to you but as before, don’t fall into the habit of doing it the same way every time. Re-holster and secure and straps or restraints. Perform the drill five times.

Defensive drills are very important but you don’t have to make them too hard and too costly. If you find training too hard and expensive, then it will seem more like you’re paying to do work and you won’t want to do them at all. Feel free to mix up some of these drills, you will be amazed after a few of these how much better your shooting is, and it didn’t cost you an arm and a leg to do it.