I’ve had the good fortune to travel a fair amount. All around the U.S. and parts of Canada, though also outside our continent. Mostly to Europe, but one trip to Argentina a few years back. I learned a long time ago to try and take cultures on their own terms, without a lot of preconceived notions and my own prejudices. In other words, I try and be a good guest in other people’s homes.

Still, certain biases do settle into what you expect when you go someplace new and foreign despite any preparation or research you do prior. Such was the case with my recent trip to New Zealand.

I thought that it would be interesting to check out the shooting sports in New Zealand for Guns.com while I was there on other business. So I did some poking around online, made some contacts, and set up a couple meetings with people.

From that little bit of research and other things I’ve absorbed over the years, I knew that hunting was popular in New Zealand and that there was an active IPSC culture. But I thought that overall, shooting in New Zealand would be based on the European model, a more formal and government-controlled activity than it is here in the U.S. 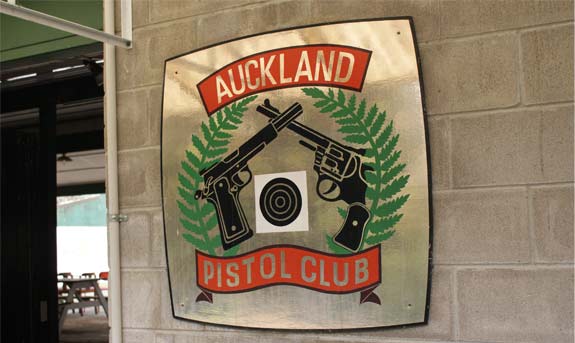 The first person I connected with was Debbie Wakker, President of Pistol New Zealand, the governing organization for most of the different shooting sports involving pistols. Debs, as she goes by, was kind enough to offer to meet me and my wife Martha when we were in Auckland, have us to dinner with her husband Andy, show us some of the shooting facilities in the area and help me connect with others in New Zealand.

This was my first indication of Kiwi hospitality and it certainly wasn’t misleading – everyone we met in New Zealand was friendly, helpful, and very personable. Those involved in the shooting sports were all enthusiastic about sharing their love of guns and shooting.

And this openness soon led to my first revelation of the trip: about one-third of all adult Kiwis have a general firearms license, the first level of permit necessary to own any kind of gun. Firearms are very much part of the culture, and particularly in the more rural areas (which is most of the country) the majority of homes have some kind of long gun for hunting or pest control.

Debs and Andy picked us up while we were in Auckland, took us back to their place. It was a very nice suburban home like you’d find just about anywhere in the U.S. Andy has a side-line business selling firearms and doing custom gunsmithing, with a shop in his basement. He showed us some of the things he was working on, as well as a few items from his personal collection.

I asked whether a gun safe was required by law.  It is, and has to be certified regularly. I also remarked that several of his rifles had suppressors – he said that they’re common there, and don’t require any special permits or anything. There is an overall length minimum for long guns, but barrel length isn’t mandated.

As noted, a large chunk of New Zealanders have the necessary permit to own a long gun for ‘sporting purposes’. Andy and Debs explained that beyond that are additional license endorsements for owning pistols, collectible items, gunsmithing, and selling firearms. For each additional endorsement there are additional requirements, and so fewer people have them, but owning guns of several types (long guns and handguns) is still pretty common.

It was also reassuring to see that like US gun control measures, New Zealand gun laws are not without their quirks.  One odd thing I noticed – for the average person, it isn’t too difficult to own a handgun with a barrel under 4″. But it is almost impossible to shoot it legally unless you’re Law Enforcement or Military, and even then it’s tightly controlled. Andy has a couple such guns, which he’s never actually fired.  They’re considered “collectibles.”  So yeah, you guessed it, there’s no provision under the law for concealed carry.

After looking over his shop and chatting for a while, they loaded up a couple of raceguns (both Debs and Andy shoot Open Division IPSC) and gear, and we headed out for the Auckland Pistol Club. 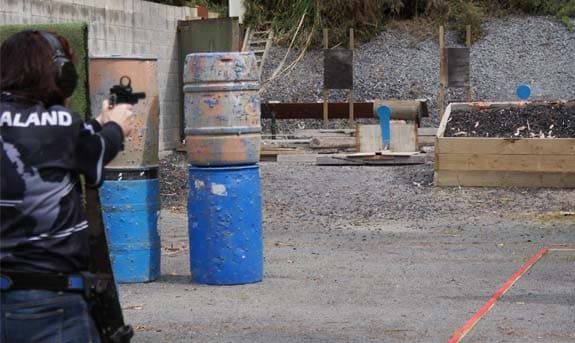 As I’ve said before, I’m not much of one for shooting at formal ranges. I’m more of a country boy, shooting informally on land we own well outside of town. Nonetheless, I’ve been to my share of ranges, and the Bianchi Cup is even shot at the Green Valley Rifle & Pistol Club in my hometown. I’ve shot there several times and I was curious to see how the Auckland Pistol Club compared.

It’s great. The club, while meeting all the required safety and environmental regulations, wasn’t like some of the sterile, formal facilities I’ve seen in Europe. It was a little ramshackle in a very friendly and inviting way; not intimidating in the least and, frankly, not that different from the set-up out at Green Valley. Maybe a little bigger.

And the other people there shooting were also the down-to-Earth sort of middle-class folks I’m familiar with.  Most of them were busy getting things set up for hosting a competition the next day. They were setting up shooting stations, doing minor repairs to moving targets, piling on a fresh coat of paint here, cleaning up a minor mess there. Normal people, doing the necessary volunteer work on their time off, so that everyone in the club could enjoy shooting that weekend. I felt right at home.

Debs wanted to check that her gun was functioning properly, after doing some minor tweaks to it (I think she said a new recoil spring). So Martha and I grabbed some loaner hearing protection from the clubhouse, and went with her and Andy to one of the shooting areas, which wasn’t currently being worked on. Debs and Andy did the range check, made sure it was safe, then she got out her competition belt, holster and mag holders. She suited up then took out her custom pistol – a nice racegun in .38 Super with a red dot sight – and locked it into the holster. Andy and Debs both put on their own hearing protection, then Debs unpacked ammo and loaded a magazine. 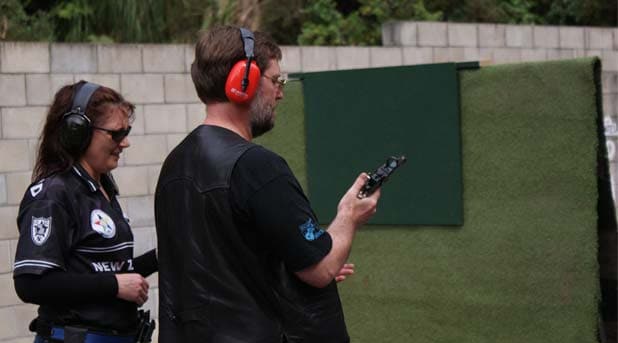 After double-checking to make sure the range was clear, all the safety procedures met, Debs tested her gun. It worked flawlessly, and she knocked down the steel plates 25 meters away like a pro. Clearing the weapon, locking it open, she turned to me and held the pistol out: “Want to try it?”

I was basically a stranger, and here she was handing me her competition gun worth more than what it cost me for my whole vacation trip to New Zealand. That’s the kind of out-going people the Kiwis are.

“Sure.” I took the gun, loaded several rounds into the magazine, cycled a round into the chamber. Checking where everyone was, I fired three quick rounds downrange into the back berm. I’m not into competition shooting, but this gun was slick.

“Nice,” I said, handing the gun back to her.

“OK, now try mine,” said Andy, not wanting to be outdone. He got his gun out of his range bag, handed it and a magazine over to me. I repeated my previous quick three shots. Truth be told, it was even more slick.

“Also nice,” I said, handing the pistol over to Andy.

He took it. “Wanna shoot some more? There are also loaner guns in the club, if you want to try those.”

“Thanks, but that’s OK. I didn’t come here expecting to be able to shoot at all – wasn’t sure what the rules would be.”

“Oh yeah, it’s pretty easy for people to come to New Zealand and participate. We like it that way,” said Debs. “Well, why don’t we get back to town, have some dinner. We’ll take you over to a .22 rifle meet at another club this evening.”