Australian firm Marathon targets has secured an arrangement with the USMC to develop several hundred artificial-intelligence-controlled life-size, motorized targets.  If they look like mannequins glued to Segways, well, that’s because, ah, they are.  It does get more interesting, though.

The target dummies, first of all, draw a little from crash-test dummies, in that they have damage sensors that detect hit placement.  If you wing a dummy, it’s not going to go down.  If you peg its spine sensor, it’s all over but the crying.  And there’s more.

A team of of these targets will cooperate and communicate with each other, to levels set by their scenario director, who programs their mission and behavior ahead of time; after that, they react to how they’re affected (shot and “killed”).  “Using a laptop and a proprietary GUI, the instructor can create and run training scenarios—dictating the dummy’s speed, travel pattern, and acceleration and stopping among other variables. 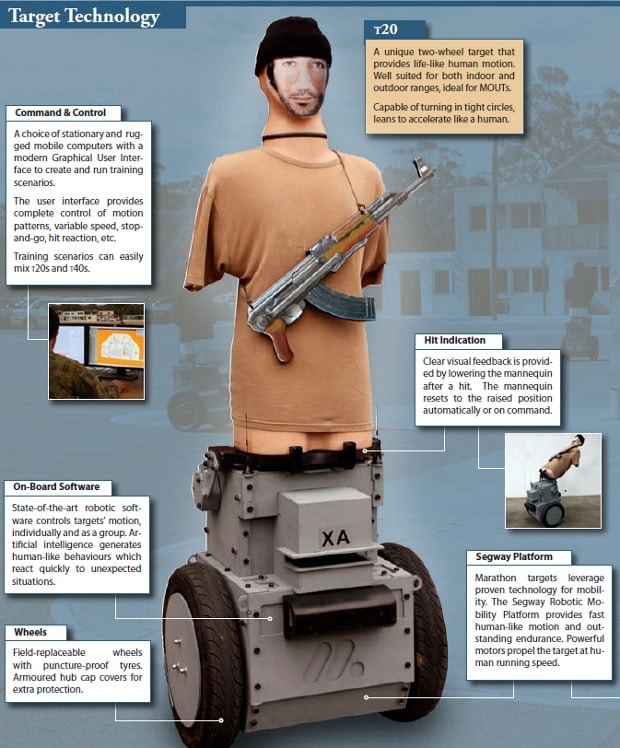 “When a kill shot is registered, the T20 will drop its dummy and the other T20’s in the area—being networked—will all scatter for cover, quickly reacting the changing situation.”

There are two types of 5-foot 11-inch Segway-derived dummies, the T20 and T40; a two-wheeled model and an off-road 4-wheeled version.  The two-wheeled dummies lean and turn and move a lot more anthropomorphically, whereas the 4-wheelers can go faster, hitting human sprint speeds, and also handle rocks and potholes.

They’re both rated to take up to 7.62mm NATO hits, and the lower motorized part of the units also have reinforced tires; they’re teeny little tanks under there.  Except they don’t shoot back.  That would decidedly be a very bad idea. 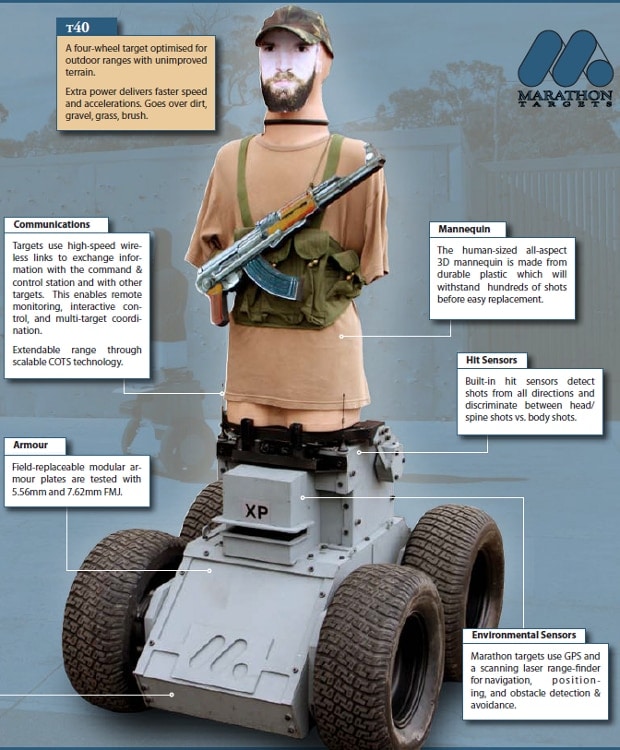 Eight of these have already been sent to Quantico for live-fire exercises, but we’ll be getting several hundred in the deal.  And for the curious, $57M AUD works out to $58M USD.

The question becomes, the cool nature of this technology aside, is this sort of live-fire training better than firing on dummies hung from cables that don’t cost millions of dollars?  And can the AI of these machines compare to human thinking with regards to force-on-force training, like with paintball or Simunition?  Or is it best to use a combination of all the above?

And as always, we welcome our robot overlords, may their reign be lubricated and powered by the splitting of the atom.